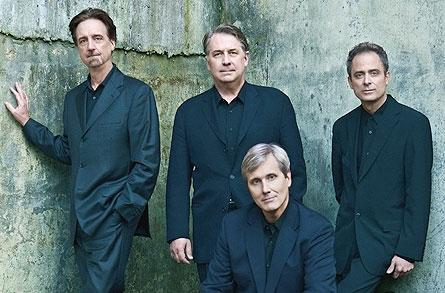 The Emerson String Quartet stands alone in the history of string quartets with an unparalleled list of achievements over three decades: more than 30 acclaimed recordings since 1987, nine Grammy Awards (including two for Best Classical Album, an unprecedented honor for a chamber music group), three Gramophone Awards, the coveted Avery Fisher Prize, and cycles of the complete Beethoven, Bartók, Mendelssohn and Shostakovich string quartets in the world’s musical capitals, from New York to London and Vienna. The quartet has collaborated in concerts and on recordings with some of the greatest artists of our time.

“Time Magazine” has called the group “America’s greatest quartet,” with “The Times (London)” saying, “with musicians like this there must be some hope for humanity.”  “The New Yorker” has said, “The Emerson has the traditional string-quartet virtues; each player is a strongly characterized individual, but the ensemble is temperamentally as well as sonically in balance. The four minds play upon each other, and upon the work, in perfect harmony; the players are in tune in all senses of the phrase.”

The quartet’s program at Hope will include works by Wolfgang Amadeus Mozart, Dmitri Shostakovich and Ludwig van Beethoven.

Formed in the bicentennial year of the United States, the Emerson String Quartet took its name from the American poet and philosopher Ralph Waldo Emerson. Founding members of the Emerson, violinists Eugene Drucker and Philip Setzer, were joined by violist Lawrence Dutton in 1977 and cellist David Finckel in 1979.

The ensemble recently announced what will be its first member change in 34 years, when cellist Paul Watkins replaces David Finckel at the end of the 2012-13 concert season. Finckel, who joined the Emerson Quartet in 1979, will leave the group to devote more time to his personal artistic endeavors.

Individual tickets for the concert are $18 for regular admission, $13 for senior citizens, and $6 for children 18 and under. Tickets are available at the ticket office in the main lobby of the DeVos Fieldhouse, which is open weekdays from 10 a.m. to 5 p.m. and can be called at (616) 395-7890. Tickets are also available online at tickets.hope.edu/ticketing/

In addition to performing in the concert, violinist Philip Setzer will be conducting a masterclass with three Hope student string ensembles on Tuesday, April 2, at 3 p.m. in Dimnent Memorial Chapel.  At a masterclass, ensembles perform for the artist and then receive feedback and advice on their work.  The public is invited to attend the masterclass, and admission is free.