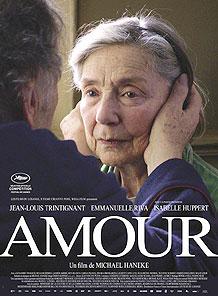 “Amour” has a simple premise. Georges and Anne, who are in their 80s, are cultivated, retired music teachers whose daughter, who is also a musician, lives abroad with her family. One day, Anne has an attack and the couple’s bond of love is severely tested.

The Michael Haneke film teams up two of the leading French actors, Jean-Louis Trintignant and Emmanuelle Riva, along with Isabelle Huppert. This film was given the prestigious Palme d’Or for best film at the Cannes Film Festival. “The New York Times,” “Los Angeles Times,” “Time Magazine” and several others have named it the top picture of the year.

The film won the Best Foreign Language Oscar at the 85th Academy Awards, and was nominated in four other categories: Best Picture, Best Actress in a Leading Role (Emmanuelle Riva), Best Original Screenplay (Michael Haneke) and Best Director (Michael Haneke). At the age of 85, Emmanuelle Riva is the oldest nominee for the Best Actress in a Leading Role.

“Amour” is in French and English with subtitles.

Tickets for the film are $6 for regular admission, and $5 for senior citizens, Hope College faculty and children. Updated information may be obtained by visiting hope.edu/arts/knick.