April 10, 2013 — by Hope PR
A total of five students who participated in physics research at Hope during the summer of 2012 had their work selected for presentation during the March Meeting of the American Physical Society. From left to right are Arthur Bowman III, a senior at Wayne State University; Hope sophomore Michael Bischak; Hope junior Kyla Koboski; Kevin Tkacz, a junior at Carnegie Mellon University; and Hope faculty members Dr. Stephen Remillard and Dr. Jennifer Hampton, their research mentors. Also selected but unable to attend the meeting was Hope senior Jonathan Yarranton of Muskegon. 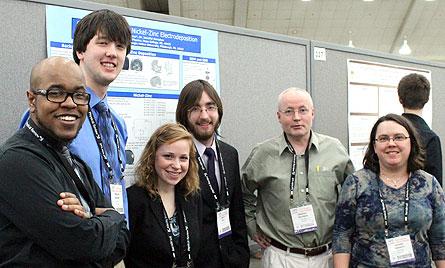 A total of five students who participated in research at Hope College during the summer of 2012 had their work selected to present at the recent American Physical Society (APS) March Meeting.

Accompanying the students to the meeting in Baltimore, Md. were two Hope College physics faculty who served as mentors for the research being presented and a sabbatical visitor to the Department.

Billed as the largest physics meeting in the world, the APS March Meeting is an annual event. This year, more than 8,500 people attended, and there were more than 750 scheduled sessions between Monday, March 18, and Friday, March 22.

The students participated in the “Future of Physics Days,” a set of events specifically for undergraduates held as a part of the meeting and organized by the APS and the Society of Physics Students. The undergraduate poster session, on Tuesday, March 19, had 346 contributed abstracts listed in the program.

Three of the students are Hope College students, whose research with Hope physics faculty is ongoing, and two are students from other institutions who did research at Hope College during the summer of 2012 as a part of the department of physics’s current National Science Foundation “Research Experiences for Undergraduates” (REU) site grant.

Bischak’s poster was “Effect of Carrier Doping on Nonlinearity of High Temperature Superconducting Thin Films.” He conducts his ongoing research with Remillard. Additional co-authors on the poster were Jinu Thomas of Glenview, Ill., who is a senior and aerospace engineering major at the University of Illinois, Urbana Champaign (who did research at Hope during the summer of 2011 as a part of the REU grant), and Philip.

Koboski’s poster was “Characterization of Electrodeposited Nanoporous Ni and NiCu Films.” She conducts her ongoing research with Hampton.

Bowman’s poster was “Modeling Plasma Formation in a Micro-gap at Microwave Frequency.” He conducted his research with Remillard.

Tkacz’s poster was “Characterization of Nickel-Zinc Electrodeposition.” He conducted his research with Hampton.

Yarranton’s poster was “Electrodeposition and Characterization of Nickel, Iron, Copper Thin Films and the Creation of Nanoporous Structures.” He conducts his ongoing research with Hampton.