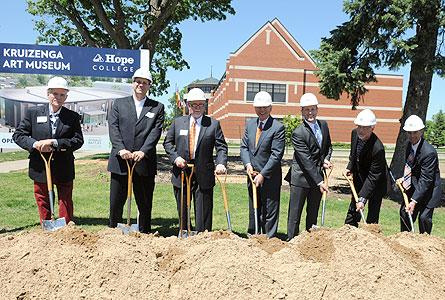 The groundbreaking celebration for the new Kruizenga Art Museum at Hope College emphasized the building’s role as a resource not just in one discipline, and not just for the campus, but across disciplines and for the entire Holland community and beyond.

“And I know that that’s the philosophy behind this wonderful place,” he said.  “And I predict that the Kruizenga, with its central location at an important campus crossroads, will become a lively town square where wonderful exchanges will happen that will drive creativity of all different types.”

The Kruizenga Art Museum, scheduled for completion in 2015, will be built immediately northwest of the De Pree Art Center, for a total project cost of $5 million including construction and a maintenance endowment goal.  The museum is being developed with an emphasis on engaging faculty and students from many academic disciplines in the study and interpretation of art, and envisioned as an educational resource not only for the college but for West Michigan.

The museum is among the initiatives of the college’s “A Greater Hope” comprehensive campaign, announced in October 2011.  It is being named in honor of a leadership gift from Dr. Richard and the late Margaret Kruizenga of Dallas, Texas, and Holland.

“When we started this campaign, we really wanted to do for the arts what we had done for the sciences, intercollegiate sport and some of our historic buildings,” said Dr. James E. Bultman, president of Hope College.  “What has evolved, I think, is a very nice arts corridor that we hope will be enjoyed not just by the Hope College community but by the community of Holland.”

Holland Mayor Kurt Dykstra discussed the concept of “place-making”—of communities striving to distinguish themselves through unique and attractive features.

“Obviously we in Holland have much of that, but this facility, this museum, will help add to the art and culture scene that already exists here in Holland with places like the Arts Council down the road, or the Holland Museum close by,” he said.  “But it’s not just a Holland phenomenon.  It’s really a whole West Michigan phenomenon.  So the presence of the Kruizenga Art Museum here in Holland in this location on this campus is certainly a gift to Hope College, and a tremendous gift to Hope College, but it is more than that because it is really a gift to the entirety of Holland and a gift to the entirety of West Michigan.”

The museum will provide exhibition space for the college’s extensive Permanent Collection as well as visiting exhibitions, with additional support for curation of the collection.  It will complement the De Pree Art Center, which will continue to host exhibitions in addition to housing the offices and faculty and student studios of the department of art.

The museum’s architect is Matt VanderBorgh of The Hague, The Netherlands, a 1984 Hope graduate who is director of C Concept Design, which has developed projects in 19 countries on four continents.  Leadership guidance for advance programmatic planning has been provided by Donald Battjes, a 1968 Hope graduate from Los Angeles, Calif., who is retired from a career in corporate facilities and real estate administration, most recently as chief of operations and facility planning with the Los Angeles County Museum of Art.

Work across the summer months will focus on the museum site, including transformation of the former 11th Street into a pedestrian walkway between Columbia and Lincoln avenues.  Earlier in the week, the college removed Gringhuis and Sligh cottages, whose lots will be part of the art museum site.

Learn More About the Project