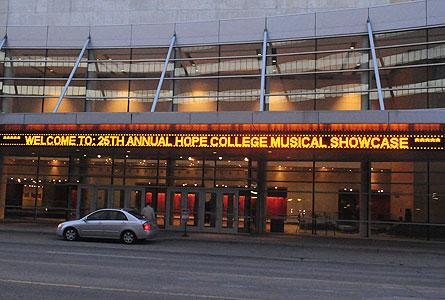 Hope College students take the stage for this fast-paced, musical spectacular, during which audience members hear everything from opera to jazz. The hardest part for those seeing the show is containing their enthusiasm, at least at first. In the tradition of the quick-moving musical event, audience members are asked to hold their applause until intermission and the end of the performance.

The concert unveils the gifts of all Hope College’s major musical groups, along with soloists, chamber groups, and small ensembles.

The program will open with the Percussion Ensemble performing “Sacrificial Rite,” by David Gillingham.

Flute and piano duo Elizabeth Schubkegel, a sophomore from Portage, and Jane Bosko, staff accompanist, will perform “The Carnival of Venice,” by Guilio Briccialdi.

Pianist James Schippers, a senior from Grand Haven,” will perform the “Piano Sonata no. 3 in B minor, op. 58 IV. Presto non tanto; Agitato,” by Frederic Chopin. “La Separazione,” by Gioachino Rossini, will be performed by mezzo-soprano Rosemary Walsh, a sophomore from Evanston, Ill., and Linda Strouf, piano.  Freshman Stanna Dorn, a flautist from Lewiston, and Linda Strouf, piano, will perform “Ballade,” by Frank Martin.

“Samba” was written and will be performed by cellist Jacob Bonnema, a senior from Peotone, Ill., and guitarist John Boss, a sophomore from Charlevoix.

“Melodia de Arrabal,” by Carlos Gardel and arranged by Diego Colatti, will be performed by senior violinists Larissa Fall of Grand Rapids and Rachael Whitmore of Clarkston. Oboist Kelsey O’Brien, a senior from Glen Ellyn, Ill., will perform “Pan,” from “Six Metamorphoses After Ovid,” by Benjamin Britten.

Organist Kristin Baron, a senior from Holland, will perform the “Finale” from Louis Vierne’s “Symphonie No. 1.”

To conclude the program, the Hope College Wind Ensemble will perform Dana Wilson’s “Dance of the New World.”

Tickets for Musical Showcase are $10 each, and may be ordered through at the Hope College Ticket Office located in the main lobby of the DeVos Fieldhouse at 222 Fairbanks Ave. The ticket office is open weekdays from 10 a.m. to 5 p.m., and may be called at (616) 395-7890. Tickets can also be purchased online through Hope’s ticket office at https://tickets.hope.edu/ticketing/

In addition, tickets may be ordered by phone through Ticketmaster by calling (616) 456-3333 or visiting www.ticketmaster.com. A service fee is added to the cost of each ticket purchased this way.