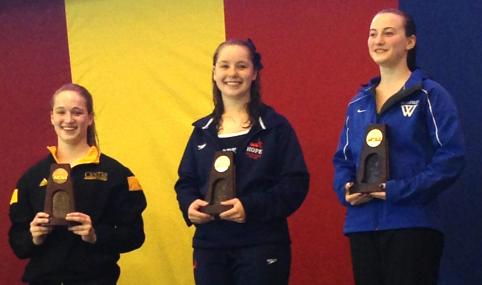 A fearless Sarah Sheridan made history as a Hope College diver on Wednesday. The junior from Richmond, Indiana (Richmond HS), finished national runner-up in 3-meter diving during the NCAA Division III Championships in Shenandoah, Texas.

Sheridan recorded a championship round score of 477.85 points for the best finish by any Hope diver — male or female — on either board at nationals.

“We’re just absolutely thrilled,” Hope diving coach Zach Golin said. “She deserves this more than anybody. She worked hard for it every day. She grinded for it. It’s absolutely amazing for her to be second-best in the nation.”

Sheridan earned All-America honors in 3-meter diving for the second time in her career. She became the first Flying Dutch diver to do so last season as a sophomore when she finished seventh.

The previous top place for any Hope diver at nationals was fifth place: Kari Jackson in women’s 1-meter diving in 2000 and 1999, and Jim Mitchell in 3-meter diving in 1989.

“I’m very excited. It was fun to have a meet where I felt consistent, and put it all on the table,” Sheridan said. “There was really good diving scores across the board. It was a fun meet to watch.”

Sheridan finished second to Maura Sticco-Ivins of Wellesley, Massachusetts, who recorded a first-place score of 500.35 during the finals.

Sheridan moved up one spot after placing third during the afternoon preliminaries with a score of 433.65 points.

Sheridan was so focused on her final two dives she said she did not realize she had moved up to second place.

“I learned from last year I’m comfortable where I finish. Tonight was another meet,” Sheridan said. “I was going to do what I love to do. (The final two dives were) what I was hoping for. It was a good way to end the meet.”

Sheridan sprung into second place with her next-to-last dives. She scored her best marks from the judges with 54.6 points on a back 2 ½ tuck.

“She knows she can hit it,” Golin said. “She was extremely confident. She was focused on her own needs. She went up there and used that for an awesome score that gave her a lot of confidence into that last dive.”

Sheridan gave Hope 17 points and put the Flying Dutch into a tie for 15th place in the women’s standings.

Sheridan recorded the highest 3-meter finish by a Michigan Intercollegiate Athletic Association diver at nationals since Calvin’s Erica Deur was national runner-up in 2009.

“She’s just fearless,” Golin said. “She’s willing to get up there and do dives until she gets them right. That takes a lot of tenacity and grit. Her degree of difficulty is just far and above anyone in the country. She’s willing to continue to push the limits.”

Sheridan will compete next in 1-meter diving on Friday. She finished seventh in the event at nationals last season as well.