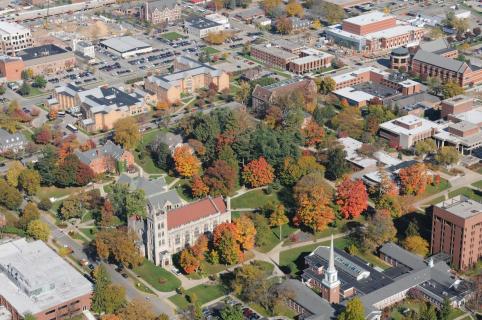 The association is recognizing Major Jeremy Latchaw of Holland, who is a 2000 Hope graduate, and Matthew Van Der Wende of Amsterdam, the Netherlands, who is a 2005 Hope graduate.  The awards will be presented during a dinner at the college’s Haworth Inn and Conference Center at 6 p.m.

The Young Alumni Award was established to honor the talents and contributions that young alumni have made to their professions, their communities and to the college, and was first presented in 2007.  Criteria include having been a member of the Alumni Association for 15 or fewer years; notable prominence through professional endeavor, research, volunteerism, and/or involvement with the local or global community or the college; and demonstrating significant initiative by starting innovative service projects, research, businesses or other original enterprises.

Latchaw is a decorated U.S. Army officer, co-owner of two Orange Leaf franchises in West Michigan and strategic consultant who is deeply committed to community service.

Van Der Wende is managing director with Stryker Medical EMEA (Europe Middle East and Africa) in the Netherlands, a senior leadership role that reflects a decade of valued service and increasing responsibility with Stryker since graduation.

Latchaw majored in business administration and religion at Hope.  His activities as a student included participating in Army ROTC through Western Michigan University, and serving with Hope College TRiO Upward Bound and as a resident assistant.  He completed an MBA at Baker College in 2008.

Following graduation from Hope, he was commissioned as a second lieutenant in the U.S. Army, stationed initially in Texas.  During his active service he was deployed to Iraq, earning decorations including the Bronze Star, and he later served in Kuwait during 2007-08 while in the U.S. Army Reserve.  Promoted across his time in the military, he continues to serve in the U.S. Army Reserve as a major, and is an associate professor of military science in the Army ROTC program at Western Michigan University.

He served with the Boy Scouts of America in Kansas as a district executive from 2005 to 2007 and as a senior district representative from 2008 to 2009.  In 2009, he joined the management consulting firm Booz Allen Hamilton, which he continues to serve as a consultant.  Also in 2009 he wrote the book “American Patriotism through the Eyes of an Eagle,” which won a Christian Choice Book Award.

Latchaw and his wife, Molly, relocated to Holland in 2013.  They operate two Orange Leaf frozen yogurt franchises in the area, donating 20 percent of their profits to charity.  His additional involvement in West Michigan has included serving as vice president of training for Cultivate Holland and as the ROTC Awards chair for the Michigan Sons of the American Revolution.  His continued engagement with Hope has ranged from hosting Hope-Calvin rivalry satellite parties; to serving on his 10-year reunion committee; to volunteering with the Center for Faithful Leadership, Career Resource Network and Admissions program.

Van Der Wende majored in business management at Hope.  His activities as a student included serving as president of the Baker Scholars, an elite group of business students who plan a career in business or future graduate business studies; as marketing and corporate development leader for the student-organized Dance Marathon held on behalf of Helen DeVos Children’s Hospital; student leader with the Young Life organization; and Habitat for Humanity and the spring break immersion trip program.  He also participated in summer study-abroad programs in Vienna, Austria, and London, England.  He also completed time at UCLA Anderson School of Business in the medical marketing course and has participated in the Stryker Harvard Leadership academy program in Cambridge, Massachusetts.

Right after graduation he joined Red Bull as an event sports marketing specialist and a brand ambassador on college campuses.   He developed his marketing and entrepreneur spirit with them.

He joined Stryker Corporation, one of the world’s leading medical technology companies, shortly after graduation as a marketing associate with Stryker Interventional Spine in Kalamazoo.  He remained with the division for the next nine years, becoming a marketing manager in Kalamazoo in 2006; sales territory manager for New Mexico, Arizona, Las Vegas and El Paso, based in Phoenix, Arizona, in 2007; and senior group product and marketing manager in Kalamazoo in 2008.  He was named associate director of marketing in 2009, and director of marketing in 2012.

Van Der Wende and his wife, Laura, relocated to the Netherlands in 2014 when he became managing director of Stryker Medical EMEA, responsible for sales, marketing, service and finance efforts in Europe, the Middle East and Africa.  The company opened a new, 59,000-square-foot European Regional Headquarters in Amsterdam’s Southeast business district in January.

His community service has included involvement with Young Life throughout his time in West Michigan, Scottsdale, Arizona, and most recently Amsterdam.  He has assisted in starting up Young Life in Middleville over the last few years.  He also served on the West Michigan committee for Young life. He has stayed connected with Hope since graduation, including by providing opportunities for business students to partner with Stryker on marketing/consulting projects, recruiting for Stryker through the Career Development Center, and coaching and mentoring many Hope students as they enter the business world.

While on campus, both Latchaw and Van Der Wende will also present workshops hosted by the Alumni Association and the college Career Development Center and designed for students as they consider their lives after graduation.  Latchaw will present “Finding Purpose in Any Job” on Wednesday, April 8, and Van Der Wende will present “Performance Through Involvement: Maximizing Your Strengths” on Thursday, April 9.