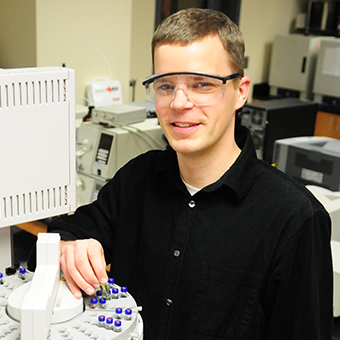 Dr. Jeff Johnson of the Hope College chemistry faculty has received national recognition through a 2015 Henry Dreyfus Teacher-Scholar Award from the Camille and Henry Dreyfus Foundation, one of only seven presented nationally.

It is the second year in a row that a Hope professor has received the award, which recognizes faculty in the chemical sciences at undergraduate institutions based on accomplishment in scholarly research with undergraduates as well as a compelling commitment to teaching.  Dr. Jason G. Gillmore was honored last year.

“Hope has an incredibly strong tradition of teaching both in the classroom and through student-faculty collaborative research. Outstanding faculty like Jeff Johnson and Jason Gillmore continue this tradition,” said Dr. William F. Polik, who is the Edward and Elizabeth Hofma Professor of Chemistry and nominated both Johnson and Gillmore for their awards during his recent service as chairperson of the department.  “The recognition that they have each received is richly deserved.”

Reflecting in particular on Johnson’s award this year, Polik noted, “Jeff has developed an exceptionally productive and renowned research program, is an outstanding teacher, and is involved in many service and leadership activities.  His research students themselves win national recognition, students flock to his organic chemistry courses, he is committed to outreach beyond campus and he has become a mentor to other young faculty.”

It is the second time that Johnson, an associate professor of chemistry, has received a major award from the Camille and Henry Dreyfus Foundation.  In 2007, as he began his first year at Hope, the foundation presented him with a Faculty Start-Up Award, recognition of faculty demonstrating promise as researchers at the beginning of their careers.

The Henry Dreyfus Teacher-Scholar Award includes an unrestricted research grant of $60,000.  Johnson will apply the award to his ongoing research program focused on carbon-carbon single bond activation and the development of transition metal catalyzed methodologies, work that he conducts collaboratively with Hope students.

Johnson has mentored 50 students in research at Hope, with many serving as co-authors of articles published in professional journals.  His students have also received recognition from the Barry M. Goldwater Scholarship and Excellence in Education Foundation program and the National Science Foundation Graduate Research Fellowship program.  Students in his organic chemistry courses have averaged in the 90th percentile nationally on the American Chemical Society’s (ACS) standardized exam for organic chemistry.

In 2012, Johnson was the only faculty member from a primarily undergraduate institution chosen to speak at the Young Academic Investigators Symposium of the ACS’s Division of Organic Chemistry.  In 2013, he was a plenary speaker and panelist at the division’s Graduate Research Symposium to help graduate students discern and prepare for various career paths.

He is also active in chemistry outreach in the community.  He leads demonstrations and interactive sessions each year for local schools and other area organizations, and with his students prepares interactive activities and laboratories for the Hope College TRiO Upward Bound program for high school students.

Johnson has received more than $1 million in external support since coming to the college.  In addition to the two awards from the Camille and Henry Dreyfus Foundation, his grants have included a major award through the “Faculty Early Career Development (CAREER) Program” of the National Science Foundation (NSF), a Research Corporation Cottrell College Science Award and an NSF - Major Research Instrumentation award for a remotely accessible 400 MHz NMR spectrometer.  He also co-authored, with Dr. Aaron Best of the biology faculty, the college’s successful proposal for a 2015 Beckman Scholars Program award from the Arnold and Mabel Beckman Foundation in support of student research.

Hope named him a Schaap Research Fellow in 2013 and he held a Towsley Research Scholar award from the college from 2010 to 2013, providing additional institutional support for his research program. Among other service to the college, he also advises the college’s Chemistry Club.

Prior to coming to Hope, Johnson served as a National Institutes of Health Postdoctoral Fellow at Colorado State University.  He previously completed his doctorate in chemistry at the University of Wisconsin-Madison in 2004.

He mentored undergraduate students while engaged in research at both Colorado State University and the University of Wisconsin-Madison.  He also participated in undergraduate research himself as a student at Gustavus Adolphus College in St. Peter, Minn., from which he earned his bachelor’s degree in chemistry in 2000.

The Camille and Henry Dreyfus Foundation Inc., based in New York, was established in 1946 and is a memorial to Camille and Henry Dreyfus, two brothers who made major contributions in the research of materials used in the manufacture of photographic films. The foundation’s purpose is to advance the science of chemistry, chemical engineering and related sciences as a means of improving human relations and circumstances throughout the world. In broad terms, the foundation’s programs advance young faculty of early accomplishment, develop leadership in environmental chemistry, and enhance chemistry education and public interest in chemistry.

Awards presented by the foundation include teacher-scholar honors named for both Camille and Henry Dreyfus.  In addition to Johnson and Gillmore, other members of the Hope faculty who have received teacher-scholar recognition from the foundation have included Dr. Maria Burnatowska-Hledin (1999), who is the Frederich Garrett and Helen Floor Dekker Professor of Biology and Chemistry and a Schaap Research Fellow; Dr. Michael Silver (1988), who retired in 2009 as the Frederich Garrett and Helen Floor Dekker Professor Emeritus of Biomedicine and Chemistry after teaching at Hope since 1983; Dr. Michael Doyle (1973), who taught at Hope from 1968 until 1984 and currently chairs the Department of Chemistry and Biochemistry at the University of Maryland, College Park; and Dr. Sheldon Wettack (1970), who was a member of the chemistry faculty and later dean for the natural sciences from 1967 until 1982 and returned to the college in 2004 to teach part-time after retiring as dean of faculty and professor of chemistry emeritus at Harvey Mudd College.

More about the Henry Dreyfus Teacher-Scholar Award program and a listing of the recipients is available here.