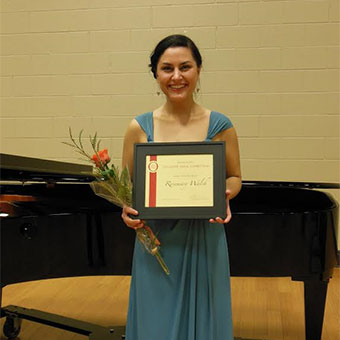 Hope College senior Rosemary Walsh of Evanston, Illinois, won third place in Division I, the division for college juniors and seniors, during the final round of this year’s Opera Grand Rapids Collegiate Vocal Competition, held on Sunday, Nov. 22, at the Betty Van Andel Opera Center in Grand Rapids.

Walsh was one of 10 students competing in the final round, out of 30 who had participated in a preliminary round the previous day.  Contestants were from Aquinas College, Calvin College, Grand Rapids Community College, Grand Valley State University, Hope College and Western Michigan University.

The Opera Grand Rapids Collegiate Vocal Competition provides an opportunity for outstanding student vocalists being trained full-time at West Michigan area colleges and universities to compete in a professional competition and be recognized for excellence by a professional opera company.

The Opera Grand Rapids award marks the second time that Walsh has earned recognition as a singer this month.  On Saturday, Nov. 7, she placed second in the College Senior Women category of the National Association of Teachers of Singing (NATS) Michigan State Chapter Auditions, earning the opportunity to participate in the Great Lakes Regional Auditions in February.

She has received a variety of external honors as a singer during her time at Hope, including first place in Division II—the division for college freshmen and sophomores—of the Opera Grand Rapids Collegiate Vocal Competition as a sophomore, and second place in the Freshman College Women category of the NATS Great Lakes Regional Auditions as a freshman.

At Hope, Walsh has been featured as both a soloist and as a member of a duet during the college’s annual Musical Showcase concert, and she also performs as a member of the college’s Chapel Choir.  She has also participated in other vocal ensembles including the College Chorus and Women’s Chorus.  A vocal music performance major, she is a student of Linda LeFever Dykstra, who is an associate professor of music and chair of the voice division at Hope.

Walsh’s activities at the college have also included the Kappa Beta Phi (Dorian) sorority, the Nykerk Cup competition and the student-organized Dance Marathon held on behalf of Helen DeVos Children’s Hospital.  She is a 2012 graduate of Evanston Township High School, and the daughter of Thomas and Elizabeth Walsh of Evanston.