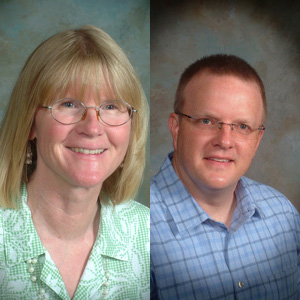 Dr. Vicki Isola of the Hope College biology faculty and Dr. Stephen Scogin, who holds a dual appointment in biology and education, have both been named National Academies Education Fellows in the Life Sciences for the 2015-16 school year.

Isola and Scogin received the recognition as participants in the 2015 National Academies Northstar Summer Institute on Undergraduate Education in Biology, held on Monday-Saturday, June 8-13, at the University of Minnesota, Twin Cities.  During the event, teams from 17 colleges and universities with research programs from across the United States assembled in Minneapolis for five days of workshops, discussions, intensive team work and analysis, all focused on enhancing undergraduate education, with themes of active learning, assessment and diversity as the primary foci.

Each institution’s participants worked as a team with other schools’ participants to develop or adapt a unit of teaching activities for implementation during the 2015-16 academic year.  Isola’s and Scogin’s group developed a heredity unit called “Connecting Mendel to Meiosis” that emphasizes the connections between meiotic division and genetic inheritance.  The unit was developed for an introductory 100-level biology course and will be used in Isola’s Biology 103 Introduction to Cell Biology course and Scogin’s Biology 104 Organisms and Environments course.