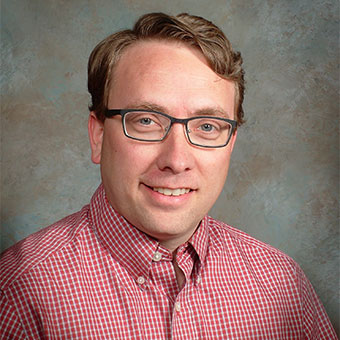 The presence of E. coli in a lake can lead to beach closures—not much fun for a family planning to enjoy the water on a hot day, and a health concern that’s more than a little alarming in any case.

Dr. Aaron Best of the Hope College biology faculty notes that E. coli doesn’t necessarily need to be such a worry.  There are more than 6,000 strains worldwide, many not associated with potential illness.

“Water quality monitoring methods often focus on E. coli as an indicator of fecal contamination, but Escherichia can exist in the environment independent of having originated with a host and have no relation to such contamination,” said Best, who holds the college’s Harrison C. and Mary L. Visscher Endowed Professorship in Genetics.

The trick is to know which is which, and that’s where an ongoing research project at Hope focused on the Macatawa watershed comes in.  It’s work that’s newly supported by a three-year, $775,316 grant to Best from the National Science Foundation (NSF) for the first study of its type anywhere in the world:  a comprehensive chronicling of multiple strains of E. coli that occur in non-host-associated environments.  More, the researchers are also going to collect data on the other microbes found alongside the E. coli strains, to see if the relationships between them matter.

That sort of tool is still some years off.  In the meantime, Hope researchers are engaged in what Best notes is the first large-scale effort to develop an extensive data set of the variety of E. coli strains found in an ecosystem and the potential for genetic exchange among them.

“Even though E. coli is the best-studied organism on the planet, much of that study has been on laboratory strains—and strains that have been associated with hosts such as humans and subsequent illness,” Best said.  “There’s been relatively little examination of strains in non-host environments such as the Macatawa watershed.  A very limited set of these environmental genomes exist in public databases, yet thousands of Escherichia genomes from clinical, commensal and host-associated sources are available.”

In addition to Best, the interdisciplinary project’s research team includes faculty members Dr. Matthew DeJongh (computer science), Dr. Michael Pikaart (chemistry) and Dr. Stephen Scogin (biology and education), as well as multiple students.  Best estimates that the project will add more than 750 new genome sequences to the public databases, usable by researchers around the world, from distinct strains of E. coli present throughout the Macatawa watershed.  It’s a process that is already well underway, thanks to the college’s freshman-level “Day 1: Watershed” program and upper-level microbiology course, whose students have been collecting samples and analyzing data along with peers conducting research outside of class.

“Essentially, all the preliminary data that I shared in applying for the grant came from classroom-based laboratories,” Best said.  “I’m pretty excited about that particular opportunity for our students as well:  the fact that the work is fully embedded in classes and engages students in cutting-edge scientific research while providing a unique data set that isn’t available anywhere else.”

Best noted that the active involvement of students in courses allows much more extensive sample collection than would otherwise be possible, as will the collection of samples across years.

He notes that the results thus far have been intriguing.  For example, some of the local E. coli strains have proven more similar to strains found elsewhere in the world than to different strains within the Macatawa watershed, even though the watershed strains share a relatively similar environment.

Why?  That’s one of the questions still awaiting answers.

“There’s so much left to understand,” Best said.  “That’s at the heart of the grant.”