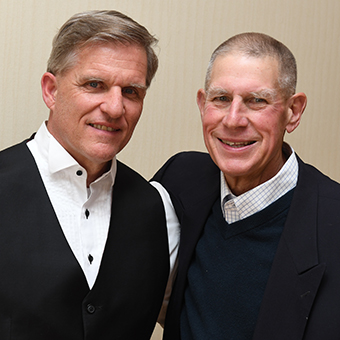 The alumni H-Club at Hope College will present its Hope For Humanity Award to former men’s basketball player Richard L. (Rick) Reece ‘82 today during the HOPEYs ceremony at DeVos Fieldhouse.

Reece is the founder and executive director of Village Focus International, an Asia-based non-profit organization that is a leader in southeast Asia in the fight against human trafficking and in promoting land and natural resource rights for village people throughout the region.

The HOPEYs celebration of Hope College Athletics and senior student-athletes is Monday, April 24 at DeVos Fieldhouse. Admission is free. Doors open at 6:30 p.m. The program starts at 7 p.m.

The H-Club selects recipients for this award from nominees who meet the following criteria:

Past Hope for Humanity Recipients

A high school state basketball champion at Maple City Glen Lake in Northern Michigan, Reece played basketball for the Flying Dutchmen from 1979-82. He was a member of Hope team that broke a 11-year, 22-game losing streak in The Rivalry to Calvin College in 1980.

Reece has been based in Asia for much the past 32 years, including the past 18 years in Laos.

After graduating from Hope College in 1982, Reece worked for two years as admission counselor for his alma mater. He then moved to Sendai, Japan to work as assistant director of the Sendai Student Center and led the travel-study program for Japanese university students. He made visits to Thailand, Malaysia and Laos.

Masters degrees from the University of Michigan in Asian Studies in 1989 and the University of Oregon in Public Policy, Planning and Management in 1996 bookended five years for Reece in the Philippines. He spent three years there as a Peace Corps volunteer and two working for a non-profit organization in a small island province.

Reece lived for all five of these years on a tiny Itbayat Island in Batanes Province, the northernmost inhabited island in the northernmost province of the country, and a place hit by an average of a dozen typhoons each year.  The island is among the most isolated and inaccessible of the country, with 100-300 foot cliffs all around and not a single beach, often out of contact with the rest of the world for months at a time.

From early 1992 to the end of 1996, Itbayat had no electricity and no running water, and Reece’s challenge was to work with the local community to build a domestic water delivery system for the island’s 3,000 inhabitants.

Three years after his arrival all island households had a gravity fed water spigot at their homes, a testament to a spirit of community mobilization that was the single most influential experience in shaping Reece’s professional vision and future work, and eventually led to the founding of Village Focus International.

Reece is married to Nalin Meckdala. The couple has two children: Alan, 24, and Annabella, 13.

Reece is an active member of the expatriate community in Laos. He is serving as a long-term board member at the Vientiane International School his daughter attends, including board chair in 2009 when the school’s new campus was built.

Reece is a founding member of the American Chamber of Commerce in Laos. He has worked with the American Embassy in Laos and seven U.S. Ambassadors there.

Learn more about the H-Club