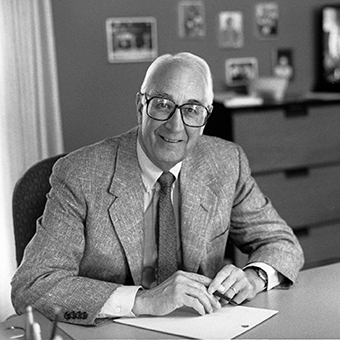 His tenure on the board coincided with two major capital campaigns:  the “Campaign for Hope” (1985-87) and “Hope in the Future” (1992-94).  Campus development through the campaigns included the construction of the Maas Center, Admissions House, Van Wylen Library, Lugers Fieldhouse and DeWitt Tennis Center; acquisition of the Knickerbocker Theatre; addition of laboratories to the Peal Science Center; and renovation of the track and field facilities.  Significant growth in the college’s endowment included major support for the academic program; multiple endowed professorships and student scholarships; and establishment of the Hinga-Boersma Dean of the Chapel and additional support for Campus Ministries.

De Pree began his career with Herman Miller Inc. in 1947.  For 40 years, until December of 1987, he worked in nearly all areas of management, including for 18 months in Europe directing the international operations.  He became chief executive officer in 1980.

He was the author of five books:  “Leadership is an Art,” “Leadership Jazz,” “Dear Zoe,” “Leading Without Power” and “Called to Serve.”  His books have sold more than one million copies and have been translated into more than a dozen languages.

Among other honors, he received the Presidential Commemorative Medal from the Los Angeles chapter of the American Institute of Architects in 1991 and was an honorary member of the Michigan chapter of the AIA.  He was elected to the Fortune magazine National Business Hall of Fame in 1992, and in 1997 received the Lifetime Achievement Award from the Business Enterprise Trust.  He held seven honorary degrees.

De Pree was a member of the Peter Drucker Foundation Advisory Board and for 40 years served on the board of Fuller Theological Seminary in Pasadena, California.  Fuller established the Max De Pree Center for Leadership in 1997 in his honor.

Survivors include his wife, Esther, his sons Charles and Kris, his daughters, Jody and Nancy, their spouses, 23 grandchildren and 13 great-grandchildren.  His daughter-in-law Dr. Barbara De Pree is a member of the college’s Board of Trustees.

Arrangements are by Langeland-Sterenberg Funeral Homes.  His obituary is available online.