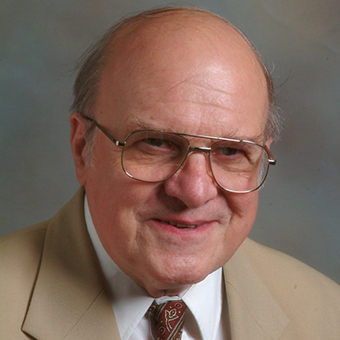 In 1956, Dr. Charles Huttar, now an emeritus professor of the Hope College English faculty, became a founding member of the Conference on Christianity and Literature (CCL). This year, following more than six decades of active involvement in the international organization, he has become the first recipient of the group’s new service award.

Huttar, who joined the Hope faculty in 1966 and retired in 1996, received the CCL’s inaugural Margaret Patterson Hannay Service Award on Friday, Jan. 5, during a luncheon held in conjunction with the 2018 Annual Convention of the Modern Language Association in New York City.

As described by the CCL, the award is given to a long-time member of the organization “who has provided remarkable service to the society over a period of years.  Criteria for selection include sustained membership in the CCL, service in one or more offices of the society, exemplary leadership, dedication to the core values of the CCL, and recognition in the larger scholarly world.”  Dr. Margaret Patterson Hannay was a former president of the CCL who was well known in the field of early modern studies and published more than 50 articles and 17 books in her field.

Huttar had recently received his Ph.D. from Northwestern University in 1956 when he attended a Christian writers’ conference conveniently held shortly afterward at his undergraduate alma mater, Wheaton College, also in Chicagoland.

“During this event several teachers at Christian colleges, who had been exchanging their views in correspondence over the preceding five years about their teaching, their reading, their struggles, held an organizing meeting to put their relationship on a more formal basis,” he recalled.  “I took an active part in this discussion, helped draft a new constitution and so forth.”

From 1958 to 1960 he was the society’s secretary, responsible mainly for issuing a quarterly newsletter, and from 1966 to 1968 he was president.  Among other service in the years since, he has served on the board of directors and on various committees; organized three regional conferences, including two at Hope in the 1970s and 1980s for the Midwest Region; and frequently made presentations at CCL meetings, including at the Southwest regional in 2016 and 2017.  He has been the society’s historian since 1994.

Huttar has published widely on Renaissance and 17-century literature and the works of C.S. Lewis, Charles Williams and J.R.R. Tolkien.  He edited or co-edited the books “Imagination and the Spirit: Essays in Literature and the Christian Faith Presented to Clyde S. Kilby” (1971), “Word and Story in C.S. Lewis” (1991), “The Rhetoric of Vision: Essays on Charles Williams” (1996) and “Scandalous Truths: Essays by and about Susan Howatch” (2005).  Most recently, his scholarly work has included multiple journal articles and reviews; a chapter for the book “The Inklings and King Arthur,” edited by Sørina Higgins and published earlier this month; and writing an in-progress book with the projected title “New Bodies in Narnia and Elsewhere: C.S. Lewis and the Mythography of Metamorphosis.”

Huttar’s service to Hope included chairing the Department of English from 1971 to 1976.  He taught for 11 years at Gordon College before moving to Hope.

The Conference on Christianity and Literature is an interdisciplinary society dedicated to exploring the relationships between Christianity and literature.  CCL is dedicated to both scholarly excellence and collegial exchange, and includes hundreds of members from a variety of academic institutions and religious traditions from the United States, Canada, and more than a dozen other countries.

A number of Hope faculty have been involved in the organization through the years, with emeritus English professor Dr. John Cox serving three consecutive terms as president from 2004 to 2010.  The college’s Joint Archives of Holland is also the official repository for the CCL’s archives.