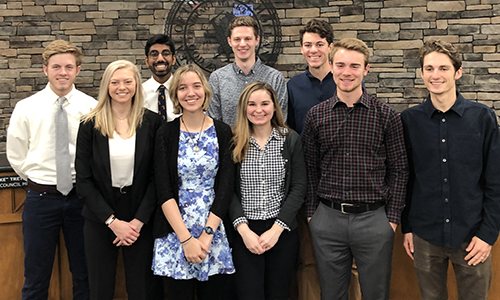 Multiple student and faculty researchers from Hope whose work has focused on the area’s environmental health presented reports during the 2019 annual meeting of the Macatawa Area Coordinating Council’s Macatawa Watershed Project, held on Thursday, Dec. 5, at Holland City Hall.

The five reports shared on-going faculty-student collaborative research as well as course-based student research projects.  The topics included the presence of pollutants in rainwater; the impact of light pollution on the night sky; the presence of heavy metals in fish in Lake Macatawa; cyclical implications for monitoring the Macatawa Watershed; and litter and microplastics on local Lake Michigan beaches.

The reports and presenters were:

Also during the Dec. 5 meeting, Maggie Oudsema of the Grand Valley State University Robert B. Annis Water Resources Institute provided an update on Project Clarity wetland and lake monitoring, and the Macatawa Watershed Project presented its Stakeholder of the Year award to the Ottawa Conservation District.  The college’s “Day1: Watershed” program had received the award in 2017.

Student teams in the “Advanced Environmental Seminar” taught by the Department of Geological and Environmental Sciences have been making presentations during the annual meeting for more than 20 years based on research projects that they have devised and pursued.  This year’s two student presentations will be posted in the future on the Macatawa Area Coordinating Council’s website, where previous projects are also archived.