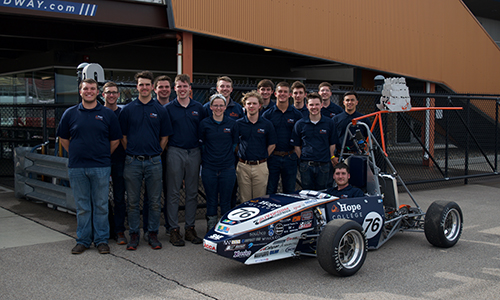 A strong finish in international competition at Michigan International Speedway earlier this month has moved the student-run Hope College Formula Racing Team ahead in both the U.S. and world rankings.

The team’s staff advisor, Carl Heideman, noted that the results are especially gratifying given that the competitors include large technical institutions with strong automotive-engineering programs like the Universitaet Stuttgart in Germany (whose hometown hosts Mercedes Benz and Porsche) and very few liberal arts colleges.

“Needless to say, we’re feeling great,” said Heideman, who is director of process and innovation at Hope.  “Formula SAE is more than just an engineering exercise — it requires creativity and problem solving — and we’ve always felt that the broad, critical thinking mindset taught in the liberal arts could give a team a real edge.  Seeing these results really shows the value of our type of education.”

The international Formula SAE organization provides a variety of design parameters within which the participants must work, but beyond that the teams make their own decisions.  Some of the parts are pre-fabricated, like the 600cc Honda motorcycle engine that provides the power.  Others — like the frame itself — have been developed by the group, starting with initial concept, and then moving through design and theoretical testing using the computer and ultimately to fabrication and construction.

Hope first participated in Formula SAE in 2010, competing with more than 100 teams from around the world at MIS.  The college returned to MIS in 2016, and also competed at Lincoln, Nebraska, in 2018.

Hope’s team placed 76th out of 102 teams in 2010, winning the William C. Mitchell Rookie Award in 2010 for having achieved the highest overall score among first time teams, and finished 77th out of 115 teams in 2016.  Hope also finished 11th in the international Formula SAE Lincoln 2018 competition in Nebraska out of 80 teams.  Also in 2018, Hope finished first out of 10 Great Lakes FSAE teams at the 2018 Lawrence Tech Grand Prix, and had the 49th fastest time out of 1,375 entries in the SCCA Solo Nationals autocross held in Lincoln, Nebraska.