The Hope College Knickerbocker Theatre will show four films featuring Barbara Stanwyck during its “One Night Only” series every Monday from Nov. 25 to Dec. 16 at 7:30 p.m. The series will screen “Stella Dallas,” “Ball of Fire,” “Double Indemnity” and “Christmas in Connecticut.”

Orphaned at a young age and raised in a variety of foster homes, Barbara Stanwyck acquired her trademark toughness through experience. She began as chorus at the age of 16 as a “Ziegfeld girl” before becoming a Broadway star. She then moved to Hollywood to appear in 81 movies, receiving several awards and nominations along the way. By 1944 she was the highest paid woman in the United States. She later transitioned to television, winning three Emmy awards for three different shows.

She was hailed by many as one of the greatest actresses. Legendary director Cecil B. DeMille said she was his favorite actress, director Billy Wilder said “she was the best,” and another director, Frank Capra, said “Stanwyck doesn’t act a scene, she lives it.”

In one of the great Hollywood quotes, film critic Richard Corliss said of Stanwyck: “When she was good, she was very, very good. And when she was bad, she was terrific.” 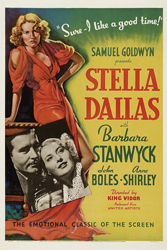 “Stella Dallas” will open the series on Nov. 25. The 1937 drama-romance stars Stanwyck, John Boles, Anne Shirley and Barbara O’Neil. When Stella Martin (Stanwyck), a working class woman, meets and marries the wealthy Stephen Dallas (Boles), they quickly have a daughter named Laurel (Shirley). Stella and Stephen struggle to stay happy as their class differences become a problem and decide to separate, with Laurel being caught in the middle of the divorce. Soon, Laurel becomes the center of Stella’s life as she struggles to be a good mother. However, Stella realizes that her daughter can flourish quite well without her. 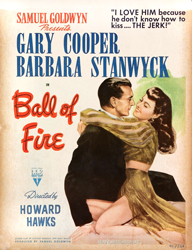 The series will continue on Dec. 2 with “Ball of Fire,” a 1941 comedy-drama film starring Gary Cooper and Stanwyck. A group of professors has lived for some years in a New York City residence, compiling an encyclopedia of human knowledge. The youngest, Professor Bertram Potts (Cooper), is a grammarian who is researching modern American slang. Venturing out to do some independent research, Bertram becomes interested in the slang vocabulary of nightclub performer “Sugarpuss” O’Shea (Stanwyck). She is reluctant to assist him in his research until she needs a place to hide from the police, who want to question her about her mob boss, Joe Lilac. As complications increase for Sugarpuss, the professors become captivated with her as her relationship with Bertram begins to grow. 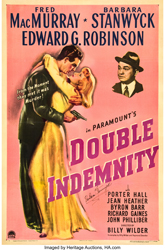 One of greatest film-noir films, “Double Indemnity,” will continue the series on Dec. 9. The 1944 crime-drama stars Stanwyck, Fred MacMurray, Jean Heather and Edward G. Robinson. Insurance salesman Walter Neff (MacMurray) gets roped into a murderous scheme when he falls for the sensual Phyllis Dietrichson (Stanwyck), who intends to kill her husband and live off the fraudulent accidental death claim. Prompted by the late Mr. Dietrichson’s daughter, Lola (Heather), insurance investigator Barton Keyes (Robinson) looks into the case, and gradually begins to uncover the truth. 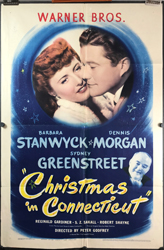 Closing the series will be “Christmas in Connecticut,” showing Dec. 16. The 1945 comedy-romance stars Stanwyck, Dennis Morgan and Sydney Greenstreet. While recovering in a hospital, war hero Jefferson Jones (Morgan) grows fond of the “Diary of a Housewife” column written by Elizabeth Lane (Stanwyck), one of the country’s most popular food writers. In her columns, Elizabeth gives details about her life including living on a farm, and being a mother, wife and excellent cook. Jefferson’s nurse writes Elizabeth’s publisher, Alexander Yardley (Greenstreet) to arrange a Christmas dinner for Jefferson at Elizabeth’s farm with her family. In reality, Elizabeth lives in New York, has never been married, does not have a child, and does not know how to cook. In order to continue living her lie, Elizabeth must find a way to appear as the perfect housewife.