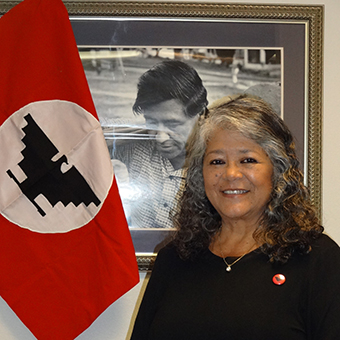 Teresa Romero, who is president of the United Farm Workers, will present the annual César Chávez Lecture Series at Hope College on Thursday, March 28, at 4 p.m. in the Schaap Auditorium on the lower level of the Jim and Martie Bultman Student Center.

The keynote address will focus on Romero's accomplishment as the first Latina to lead a national labor union. She is passionate about her work regarding overtime pay for farmworkers, heat, the dairy industry and immigration.

Romero became the first immigrant woman and first woman to lead a national labor union when she became president of the United Farm Workers in December.  Born in Mexico City, she is only the third president of the union, which was founded in 1962 by Cesar Chávez.

Before becoming the union’s president, Romero was the UFW’s secretary-treasurer and chief administrative officer.  She also owned a construction-management consulting business and had managed a law firm that assisted workers with immigration and worker’s compensation.

The César Chávez Lecture at Hope is named in honor of César E. Chávez, a first-generation American, who was born on March 31, 1927, just outside of Yuma, Arizona. Having experienced the hardships of life as a farm worker firsthand, Chavez worked tirelessly to improve the lives of farmworkers and Latino families. He became the founder and president of the United Farm Workers of America. His legacy has impacted the lives of millions of people all around the world. He was passionately driven by this mantra “we cannot seek achievement for ourselves and forget about progress and prosperity for our community... Our ambitions must be broad enough to include the aspirations and needs of others, for their sakes and for our own”. His work led to nationwide support and numerous improvements for union laborers. Dolores Huerta coined the phrase “Sí, se puede!” (Spanish for “Yes, it is possible”… “Yes, it can be done”).

The event is being co-sponsored by the college’s Center for Diversity and Inclusion, the Latino Student Organization and the campus-wide GROW (Growing Relationships through diverse Opportunities to strengthen involvement in an ever-changing World) initiative.

The Jim and Martie Bultman Student Center is located at 115 E. 12th St., at the center of the Hope campus between College and Columbia avenues along the former 12th Street.  Schaap Auditorium is near the building’s southwest corner.