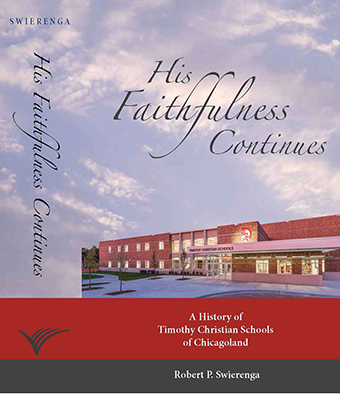 Historian Dr. Robert Swierenga has continued his longtime exploration of the legacy of Dutch immigrants to the United States with a book on a subject that played a significant role in his own life: Timothy Christian Schools.

Published earlier this month by Van Raalte Press, “His Faithfulness Continues: A History of Timothy Christian Schools of Chicagoland” follows the development of the private Christian school from its founding by Dutch Reformed immigrants in 1911 to the present.  Swierenga has written numerous books on Dutch migration and heritage, including a landmark three-volume history of Holland, Michigan, and two others focused on the Chicago area, notably “Dutch Chicago” in 2002.  He attended Timothy Christian from first grade through eighth grade in the 1940s, when the school did not yet offer high school-level instruction

Timothy Christian Schools began in 1911 with one teacher and 34 students.  As the school grew, it expanded to include ninth through 12th grades in 1951.  It has relocated twice during its nearly 110 years — from West Chicago to Cicero, the first suburb west of the city, in 1927, and from Cicero to a 23-acre campus in Elmhurst beginning with the high school in 1962, the middle school in 1970 and finally the elementary school in 1972.

“The move of the elementary school in 1972 was under duress, because the school’s non-discriminatory enrollment policy clashed with Cicero’s history of white racism,” Swierenga said.  “Locals threatened to firebomb the school if African American students from Chicago were enrolled.  The solution was to place all three schools on the same campus in the integrated village of Elmhurst.”

By 2018, Timothy had grown into a fully accredited school of 90 full-time teachers and a student body of 1,091, with buildings valued at $25 million and an annual operating budget of $12 million.  In 2019, Timothy Christian High School was one of only 50 non-public schools nationwide to receive the National Blue Ribbon Award from the U.S. Department of Education.

Beyond the book’s role as a chronicle of Timothy Christian’s history, Swierenga sees a larger story in its pages as the school traveled from its Dutch American ethnic origins with a Christian Reformed emphasis to a broader, more ecumenical scope.

With demographics changing, Swierenga said, the school correspondingly opted to recruit non-Reformed faculty and students beginning in the 1960s, establishing the arc that has continued for the 50 years since.

“Under the school's enrollment-driven transition from Dutch Christian Reformed to broadly Christian — the percentage of ethnic Dutch declined from 90 percent in 1970 to 35 percent in 2018 — religious and ethnic homogeneity gave way to diversity, although students found a shared identity in the classroom, chapel services, and school-sponsored programs in sports and scholastic competitions,” he said.  “Today, descendants of the founding generations, as well as subsequent society members, wholeheartedly support the thriving school that Timothy has become.”

Swierenga has served as the Albertus C. Van Raalte Research Professor at Hope since 1996, when he retired from the faculty of Kent State University.  He previously taught at Calvin University (1961-62, 1965-68) and Pella (Iowa) Christian High School (1958-61).

Van Raalte Press is the publishing arm of the Van Raalte Institute at Hope.    Established in 1994, the institute is located in the Theil Research Center at 9 E. 10th St. and specializes in scholarly research and writing on immigration and the contributions of the Dutch and their descendants in the United States.  The institute is also dedicated to the study of the history of all the people who have comprised the community of Holland throughout its history.  Since its founding, the institute and its affiliated scholars have published nearly 40 books.