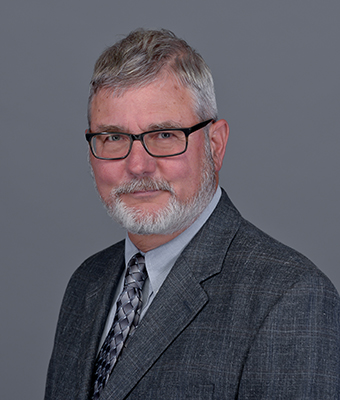 The latest book by Kent Van Til of the Hope College religion faculty has a very direct personal dimension — it focuses on his grandmother — but it’s the larger, universal story she represents that he finds most compelling.

The memory of a visit with her during her later years inspired Van Til to write the book, “A Name for Herself: A Dutch Immigrant’s Story.”  She told him matter-of-factly that she didn’t think that her life had been anything special.  In contrast, he saw in Minnie Zwier an unsung hero whose experience mirrored countless others who deserved the spotlight for day-to-day but crucial contributions too long unrecognized.

“While serving tea and cookies in her little senior apartment one day, she abruptly turned to me and said, ‘Well, I sure haven’t made a name for myself; maybe one of you grandkids will,’” said Van Til, who is a lecturer in religion at Hope.

“That struck me forcefully, for two reasons,” he said.  “First, why would a poor immigrant woman with an eighth-grade education even think she could have made a name for herself?  Second, grandma and millions of women like her should have made names for themselves.  They were pioneers and saints who made America what it is today.  Like many, she was born abroad, labored, struggled, prayed, loved, laughed, bore children, tilled virgin soil, sent sons to war, was widowed, cared for others’ children, and much, much more.”

“This book is my effort to honor her name and those of others,” he said.  “I hope that readers who have not ‘made a name for themselves’ may also take comfort and inspiration from the story of her life.”

“A Name for Herself: A Dutch Immigrant’s Story” follows his grandmother’s life from her birth in Amsterdam in the Netherlands in December 1898 through her death in South Holland, Illinois, at age 94 in December 1992.  He wrote it as a first-person reflection by her, presenting a mix of historical context and family history during nearly 100 years in the Netherlands and United States.

The journey takes Minnie through Ellis Island in 1899 and then as generations pass to Chicago, Wisconsin, Indiana and Montana; through technological change that runs from the first powered flight to the space age; and through global events including two world wars.  The numerous slice-of-life anecdotes include reflections on her father’s difficult search for work in the Netherlands that led the family to emigrate; on attending a Christian Reformed elementary school in Roseland, Illinois; of racing on horseback with a friend from the Crow nation as a teen in Montana; and of sewing clothes for her daughters.  Woven throughout is the central role played by her strong Christian faith.

“Kent Van Til has a knack for telling a story,” has said reviewer Dr. Robert Swierenga, a historian who has written numerous books on Dutch migration and heritage.  “Van Til gets inside the head and heart of this immigrant family and shows what makes them tick.  This is a great read.”

Van Til is the author of three previous books: “Less Than Two Dollars a Day: A Christian View of World Poverty and the Free Market” (2007) and “The Moral Disciple: An Introduction to Christian Ethics” (2012), both published by Wm. B. Eerdmans Publishing Company; and “From Cairo to Christ: How One Muslim’s Faith Journey Shows the Way for Others” (2017), co-authored with Abu Atallah and published by IVP Books, an imprint of InterVarsity Press.  Prior to coming to Hope in 2004, he taught at Catholic Theological Union in Chicago; Marquette University; and ESEPA (Escuela de Estudios Pastorales, the School of Pastoral Studies) in San Jose, Costa Rica.

“A Name for Herself: A Dutch Immigrant’s Story” has been published by Resource Publications, an imprint of Wipf and Stock Publishers.  The book retails for $24 in paperback and $39 in hardcover, and is available through the Hope College bookstore as well as through the publisher and other retail and online booksellers such as Amazon.