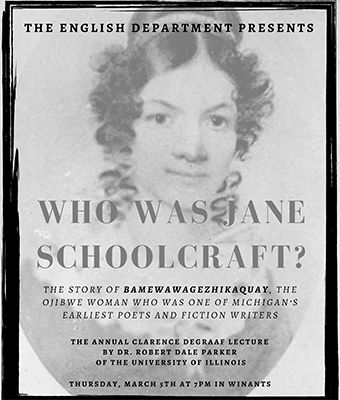 Dr. Robert Dale Parker of the University of Illinois English faculty will present the address “Who Was Jane Schoolcraft?,” about the first known American Indian literary writer, who was from Michigan, on Thursday, March 5, at 7 p.m. in Winants Auditorium of Graves Hall as the annual Clarence DeGraaf Lecture at Hope College.

Jane Johnston Schoolcraft (her English name) or Bamewawagezhikaquay (her Ojibwe name), Woman of the Sound the Stars Make Rushing Through the Sky, lived from 1800 to 1842, and was born and raised in Sault Ste. Marie.  Her mother, Ozhaguscodaywayquay, was an American Indian born in what is now northern Wisconsin, and her father, John Johnston, was a Scotch-Irish fur trader.

Beginning as early as 1815, Schoolcraft wrote poems and traditional stories while also translating songs and other Ojibwe texts into English. Her stories were published in adapted, unattributed versions by her husband, Henry Rowe Schoolcraft, a founding figure in American anthropology and folklore, and they became a key source for Longfellow’s sensationally popular “The Song of Hiawatha.”

Parker is the Frank Hodgins Professor of English at the University of Illinois.  His scholarship and teaching pursue interests in literary form and aesthetics, history, gender, the socio-political roles of literature and a pleasure in thinking through critical theory.

Parker has also published two books and many articles on the fiction of William Faulkner, including “Faulkner and the Novelistic Imagination” and “‘Absalom, Absalom!’: The Questioning of Fictions,” as well as “The Unbeliever: The Poetry of Elizabeth Bishop.  Committed to merging scholarship with readability and theory with interpretation, he has also published “How to Interpret Literature: Critical Theory for Literary and Cultural Studies” (fourth edition, 2020) and “Critical Theory: A Reader for Literary and Cultural Studies.”

Recognized by campus awards for both undergraduate and graduate teaching, Parker has taught courses in the various periods of American literature, especially after 1900, as well as critical theory surveys and courses in American Indian literature, Faulkner and other topics.

The Clarence DeGraaf Lectureship was established in 1988 by the family of Dr. Clarence DeGraaf in memory of his service on the faculty of Hope College. DeGraaf taught in the department of English at Hope for 44 years, until his retirement in 1972, and served as department chairman for 25 of those years.