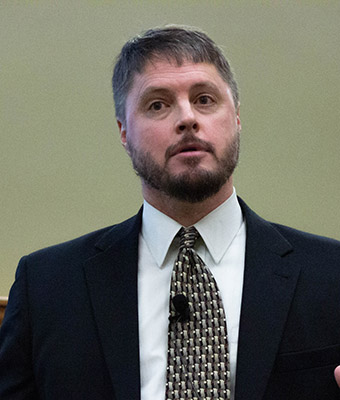 Dr. David Paul Deavel of the University of St. Thomas will present “A Frame for Freedom: Submitting to Truth as Creatures of the Creator” on Monday, Oct. 12, at 7 p.m. through a livestreamed event hosted by the Markets & Morality student organization at Hope College.

The public is invited. Admission is free, although advance registration is required. Registration information is available at the event’s listing at calendar.hope.edu.  Out of an abundance of caution due to the ongoing global COVID-19 pandemic, there will be no in-person audience.

Deavel will frame his presentation in the context of the work of Nobel Prize-winning author Aleksandr Solzhenitsyn (1918-2008), who fought for the freedom of the Russian people during the Soviet regime.  Noting that the regime ruled by a combination of lies and brutality, Deavel will argue that the biggest lie the Soviet rulers told themselves and the people was that the old limits of the natural law did not apply. He explains that they defined the “good” and the “true” as what was good for the state.

The lecture will probe Solzhenitsyn’s understanding of why it is important for people to recognize their creatureliness.  “We are not God; we stand under justice and we are bound by truth,” Deavel says.  “Only when we recognize our limits as people and as nations and ‘live not by lies’ will we find the good society that communist utopias can never even approach.”

Deavel is editor of “Logos: A Journal of Catholic Thought and Culture” and a visiting professor at the University of St. Thomas in St. Paul, Minnesota.  The 2013 winner of the Novak Prize, he is co-editor, with Jessica Hooten Wilson, of the book “Solzhenitsyn and American Culture: The Russian Soul in the West,” forthcoming later this fall.

He is also a senior contributor at The Imaginative Conservative, and has written more than 300 articles and reviews in a wide variety of books and popular and scholarly journals, including America, First Things, Journal of Markets & Morality, Library of Law and Liberty, National Review, Nova et Vetera and the Wall Street Journal. His Ph.D. is in historical theology from Fordham University.

The event is hosted by the college’s Markets & Morality student organization, and co-sponsored by the Department of Political Science, with additional support from the Acton Institute.  Markets & Morality previously co-hosted a visit by Deavel to campus in February for the presentation “Taking Advantage of Freedom: What to Do with Liberty When You Have It.”