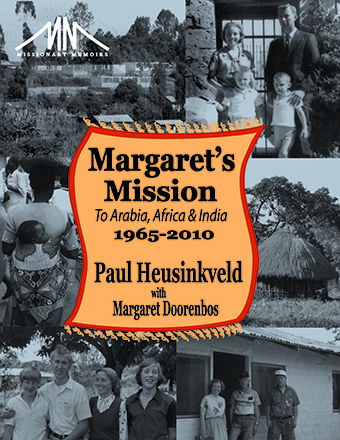 The new book “Margaret’s Mission: To Arabia, Africa & India, 1965-2010” has been published by the A.C. Van Raalte Institute of Hope College in a series chronicling the experiences and perspectives of Christian missionaries as they observed, shaped and were shaped by the communities in which they served, often during times of significant change.

The second book in the Missionary Memoirs Series of the institute’s Van Raalte Press, “Margaret’s Mission” has been written by Paul Heusinkveld with Margaret Doorenbos.  Doorenbos and her husband, Dr. Doorenbos, spent most of their lives doing medical and educational ministry through the Reformed Church in America, a journey that included Bahrain, Cameroon, Ethiopia, India, Kenya, Liberia, Malawi, New Sudan, Oman and Zambia.

Told in the first person from Margaret’s perspective, the book is based on the letters she wrote across the duration of the couple’s service.  The narrative is further informed by Heusinkveld’s conversations across the past three years with the Doorenboses and their family, friends and colleagues, and additional research by Heusinkveld and his wife, Michelle.

“In this book, Margaret describes her adventures in refreshingly candid detail, providing authentic views into the missionary lifestyle, giving a flavor of both the mundane day-to-day events, as well as the unusual ones,” Heusinkveld writes in the preface.  “In her writing, there is history, drama, success, failure, good times and not-so-good times, incredible challenges, and amazement at both the goodness and the darkness that humankind is capable of. This is what life is about.”

“Margaret takes us into a world parallel to our own, a world mostly unknown from our Western vantage point, where the people of Arabia, Africa, India, and indeed most of humankind reside,” he continues. “By entering this parallel world, we gain understanding, compassion, and respect not only for that world but also for our own.”

Following a year in Bahrain for orientation and language instruction, the couple spent the next eight years in Oman, where Harvey, a surgeon, served in the nation’s first hospital and helped develop a national healthcare system.  They spent the largest amount of time in Ethiopia — totaling approximately 17 years, with other postings in between — from 1975 through 2010.  As Harvey served the medical needs in the communities, performing an estimated 49,000-68,000 surgeries between 1965 and 2010, Margaret taught and tutored, volunteered, and provided hospitality to visitors from around the world.  They experienced friendships and generosity that transcended culture; worked to address the impact of poverty; witnessed both the benefits and disadvantages as the communities in which they served were transformed by technology; and saw the human cost of civil war and sectarian division.  Along the way, they raised two sons from whom they were also separated while the boys — like other “missionary kids” of the era — went away to boarding school.

“This is a heartwarming, intimate story of an incredibly dedicated couple who committed their lives to helping some of the most needy people in the world, often in extremely difficult circumstances,” wrote reviewer Thomas H. Staal, who is a retired counselor with the United States Agency for International Development.  “Their love of God and the people they served shines out through the pages in Mrs. Doorenbos’s storytelling, giving us a first-person account of the life they led and their trials and tribulations, as well as their triumphs.”

Heusinkveld brought a unique and personal perspective to his work on the book.  He was the son of medical missionaries serving in Bahrain through the Reformed Church in America and met the Doorenboses when they arrived in the mission field, and he attended boarding school at the Kodaikanal School in India just as their sons later did.  Heusinkveld, who is retired from a career with the U.S. Department of State, wrote about his childhood experiences with an emphasis on his time in India in the memoir “Elephant Baseball: A Missionary Kid’s Tale,” published in 2017 by William B. Eerdmans Publishing Company of Grand Rapids and Cambridge, U.K.  He and the couple also share Hope alumni ties.  Margaret and Harvey graduated from Hope in 1956 and 1955, respectively, and Heusinkveld graduated from the college in 1972.

Established in 1994, the Van Raalte Institute specializes in scholarly research and writing on immigration and the contributions of the Dutch and their descendants in the United States.  The institute is also dedicated to the study of the history of all the people who have comprised the community of Holland throughout its history.  In 2007, then-director Dr. Jacob E. Nyenhuis established The Van Raalte Press as a vehicle to publish the works developed by the institute.  The Van Raalte Press is also the official publisher of papers presented at the biennial conferences of the Association for the Advancement of Dutch American Studies.

The Missionary Memoirs Series is dedicated to publishing the previously untold stories of missionaries of the Reformed Church in America and the Christian Reformed Church in North America and Hope College alumni who worked to proclaim the Christian Gospel, both at home and abroad.  As described by the Van Raalte Press, “These books are the recorded accounts of their experiences, transformational for themselves and the people of the countries where they served.”  The series editor is Dr. Donald A. Luidens, director of the Van Raalte Institute, whose numerous publications include the book “Seeds of Hope, Hate, and Change: Missionary Witnesses to the Middle East in Transition,” which is the first of two volumes chronicling the experiences of his parents, Ruth and Ed Luidens, and debuted the series in December 2020.

“Margaret’s Mission” is available for $25 and can be purchased at hope.edu/vri.