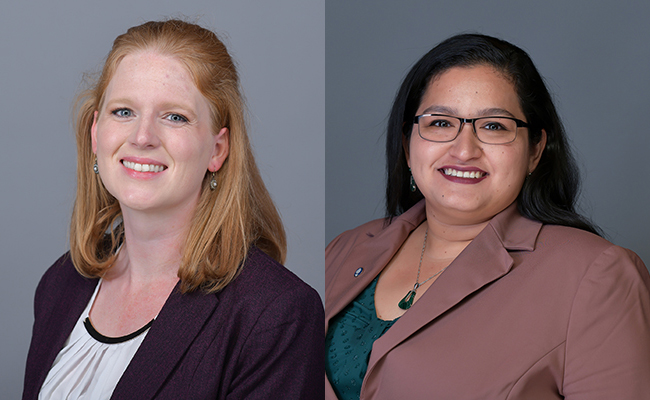 As of 2020, the world has lost an estimated two-thirds of its mammal, bird, reptile and insect populations. This extreme loss of biodiversity is widely considered a sixth mass extinction event. With the global bird population estimated to have declined by 3 billion since the 1970s, two Hope College professors have received a grant from the National Science Foundation for their research seeking to better understand why.

The NSF has awarded biologist Dr. Kelly Ronald and chemist Dr. Natalia Gonzalez-Pech more than $500,000 through a three-year grant starting in September for their interdisciplinary study of how house sparrows are affected by a specific type of air pollution:  iron oxide nanoparticles (IONPs) — floating bits of iron generated by the iron and steel industries that are so small that a standard microscope cannot see them.

“The overarching hypothesis is IONPs exposure will disrupt the [birds’] behavior by either detrimentally affecting auditory sensory processing and/or through bioaccumulation of nanoparticles,” the two scientists note in their project summary.

“Our second objective is to test the prediction that IONPs exposure alters species-relevant behaviors. Behavioral tests after IONPs exposure will assess changes in foraging and the anti-predator response.”

“Our third objective is to localize and quantify the accumulation of IONPs in relevant organs,” they continue.

The grant that Ronald and Gonzalez-Pech have received is through a new NSF initiative, “Building Research Capacity of New Faculty in Biology (BRC-BIO).”  Ronald, who has been studying the impact of human activity on human birds for several years, is an assistant professor of biology who also came to Hope in 2019. Gonzalez-Pech, whose research focuses on nanoparticles, is an assistant professor of chemistry who joined the Hope faculty in 2019.

The professors’ research project is one of two at Hope to receive a grant through the BRC-BIO program — out of approximately 20 of the awards nationwide.  Dr. Jennifer Blake-Mahmud, an assistant professor of biology who joined the faculty last fall, has received a grant that will begin in January in support of her study of how gene expression relates to the gender of plants whose sex is determined by the environment.

Where the overall drop in the global bird population is concerned (the 3 billion figure is from a study published in Science in 2019), Ronald and Gonzalez-Pech emphasize that IONPs are one piece of a larger puzzle.  Other considerations related to human activity, for example, include other forms of air pollution, pesticides and habitat loss.

They also explain that establishing that IONPs negatively affect house sparrows could have implications for everything that breathes air.  They note that IONPs have been found in the brain tissue of people in London and Mexico City (as published in PNAS, the journal of the National Academy of Sciences, in 2016), locations with a high amount of industrial activity.

Although their NSF grant goes into effect in September, Ronald and Gonzalez-Pech have been conducting their research for the past year and a half.  External support for their research has also included funding from the Michigan Space Grant Consortium and Hope’s Nyenhuis Collaborative Grant program during each of the past two years.