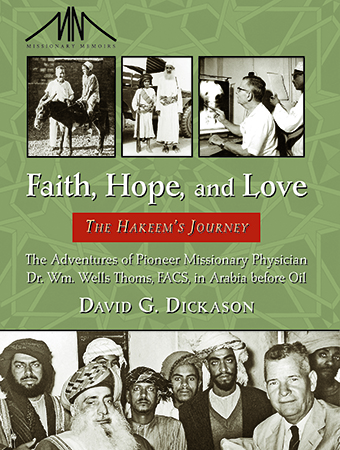 Written by Dr. David G. Dickason, the book is the third in the Missionary Memoirs Series of the institute’s Van Raalte Press.  Premiering in December 2020, the series chronicles the experiences and perspectives of Christian missionaries as they observed, shaped and were shaped by the communities in which they served, often during times of significant change.

Dr. Wells Thoms and his wife Beth Scudder Thoms served in the Middle East through the Arabian Mission of the Reformed Church in America from 1931 until retiring in 1970. They were themselves the children of missionaries, with Wells’ parents posted in the Middle East and Beth’s in India.

Wells Thoms graduated from Hope Academy — the high school formerly operated by Hope College — and attended Hope College for a year before transferring to Kalamazoo College for two years and then enrolling in the University of Michigan Medical School.  Beth Scudder Thoms was an Oberlin College graduate with a teaching certificate and physical education major. Lois Thoms Dickason, Class of 1959, is Wells and Beth Thoms’ daughter.

As described by the Van Raalte Press, “Dr. Wells and Beth Scudder Thoms, pioneer medical missionaries, show us just how the United States gained influence in Arabia during the Great Depression (before oil). As the first eye surgeon in the Gulf, Wells treated the forebears of today’s Arab rulers and their subjects — from kings, amirs, imams, and shaykhs to townspeople, nomads, and slaves.

“During World War II, Wells Thoms was Oman’s only surgeon. Beth trained lab technicians and served as the COO of the Oman mission hospitals and Wells their CMO. Wells and Beth built the Arabian Mission’s hospitals into Oman’s leading civilian health care institutions (including one for contagious diseases), saving countless lives and bettering the quality of life for many thousands of others.

“The journey of the Thomses — one of faith, courage, love, endurance, and soft diplomacy — reveals the charismatic leadership of a selflessly compassionate, Christian medical-practitioner couple. Indeed, Wells was revered by Muslims as an hakeem, a superbly skilled physician.

David G. Dickason served in higher education in the United States and abroad, and is a professor emeritus and founder-director of the W. E. Upjohn Center at Western Michigan University.

David was born in Myanmar, where his parents served as American Baptist missionaries, and raised in Myanmar, India and Pakistan. He and his family were refugees from Japan’s World War II invasion of Myanmar and survived much of the post-independence turmoil of that country upon their return.  His pre-collegiate studies were in India and Myanmar, and his university studies were in the United States. He has written on historical and contemporary subjects in India and the United States.

Established in 1994, the Van Raalte Institute specializes in scholarly research and writing on immigration and the contributions of the Dutch and their descendants in the United States.  The institute is also dedicated to the study of the history of all the people who have comprised the community of Holland throughout its history.  In 2007, then-director Dr. Jacob E. Nyenhuis established the Van Raalte Press as a vehicle to publish the works developed by the institute.  The Van Raalte Press is also the official publisher of papers presented at the biennial conferences of the Association for the Advancement of Dutch American Studies.

The Missionary Memoirs Series is dedicated to publishing the previously untold stories of missionaries of the Reformed Church in America and the Christian Reformed Church in North America and Hope College alumni who worked to proclaim the Christian Gospel, both at home and abroad.  As described by the Van Raalte Press, “These books are the recorded accounts of their experiences, transformational for themselves and the people of the countries where they served.”  The series editor is Dr. Donald A. Luidens, director of the Van Raalte Institute. The first two volumes, which also focus on RCA missionaries, are “Seeds of Hope, Hate, and Change: Missionary Witnesses to the Middle East in Transition,” by Luidens, published in 2020; and “Margaret’s Mission,” written by Paul Heusinkveld, with Margaret Doorenbos, published in 2021.

“Faith, Hope, and Love: The Hakeem’s Journey: The Adventures of Pioneer Missionary Physician Dr. Wm. Wells Thoms, FACS, in Arabia Before Oil” is available for $30 and can be purchased at hope.edu/bookstore as well as through Amazon.