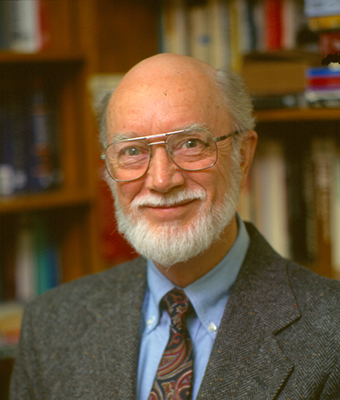 November 2, 2022 — by Public Affairs and Marketing

He joined the faculty in 1968.  Among other service in addition to his teaching in the department, he helped develop the college’s Senior Seminar program, capstone courses that prompt Hope’s seniors to consider their values and the meaning of their education as they anticipate post-college life. Himself a member of Phi Beta Kappa, he was a founding member of Hope’s chapter, chartered in 1971. He was also Hope’s campus representative to Christian Scholar’s Review for several years.

For more than a quarter century, he had a hand in honoring hundreds of the college’s top graduates, albeit anonymously. An amateur calligrapher, he penned the assorted “Laude” designations on graduating seniors’ diplomas from around 1969 through 1994 (the process subsequently became automated by the Registrar’s Office due to the larger size of Hope’s graduating classes).

He grew up in New York state and was salutatorian of his high school graduating class. He matriculated at Duke University, where he majored in English, graduating in 1954 with a Bachelor of Arts degree. He subsequently earned a Master of Divinity degree at Union Theological Seminary in 1957 and became ordained as a minister in the Methodist Church.

Retaining an early interest in writing and literature, however, he subsequently applied for and received a Wallace Stegner Creative Writing Fellowship in Poetry from Stanford University, where he studied formal verse with poet/critic Yvor Winters. He completed a one-year master’s program (creative writing-poetry) at Stanford in 1958 and doctorate (emphasis in Victorian literature) in 1964, and held appointments at both Stanford and Cornell University before coming to Hope.

He authored multiple books of poetry: “Underbrush” (1986), “In The Same Rivers” (1989), “After the Serpent’s Word” (1997), “Off and On” (2000), “In Season and Out” (2003), and “Dune Tracks” (2019).  His poems appeared in anthologies and in many well-known journals, including The Classical Outlook, The Epigrammatist, The Formalist, Hellas, The Southern Review and church-related journals such as Anglican Theological Review, Perspectives and The Church Herald. He was poetry editor of Perspectives from 2000 to 2005.

He was also the author of articles and reviews that included studies in both British and American literature, on theology and literature, as well as personal essays such as “A Skulk of Foxes” in Audubon Magazine.

He was an active member of Hope Church in Holland, where he had been an elder and returned to the pulpit periodically.

He was preceded in death by his first wife, Joan, in 1986. Survivors include his wife, Janice; his son, Dr. Matthew A. Fike ’82, of South Carolina; and daughter Deborah J. Brower ’84, of Ohio.

Memories and expressions of sympathy may be shared at www.lakeshorememorial.com for the Fike family. Funeral arrangements are pending and likely will be near the end of November.