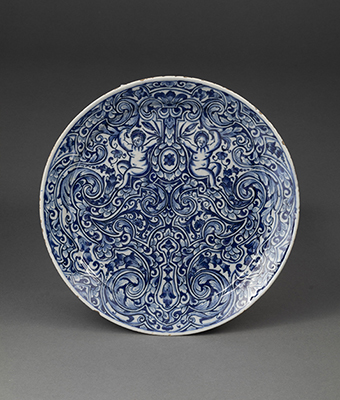 Exhibition of Dutch Delftware to Open at the Kruizenga Art Museum

The public is invited to the exhibition and reception. Admission is free.

“The Golden Age of Dutch Delftware” features a selection of historical and early modern Dutch Delftware ceramics drawn from the collection of Hudsonville resident Jack E. Lapp. The exhibition has been curated by KAM director Charles Mason.

Dutch Delftware is a type of tin-glazed earthenware ceramic that historically was produced in the city of Delft in the Western Netherlands. Delftware’s production evolved during the first half of the 17th century, with demand for Dutch Delftware reaching its peak from 1650 to 1750. Though demand for the ceramics waxed and waned over the following centuries, manufacture of Delftware continues in Delft and other places, preserving an artistic tradition that extends back more than 400 years.

“In its own time — and still today — Dutch Delftware was an exciting art form that combined European and Asian influences to create objects that are both beautiful and functional,” Mason said. “During the 17th and 18th centuries, Delftware was a global commodity that was exported to countries all over Europe as well as to North America, the Caribbean and South Africa, and even now it remains widely recognized as a symbol of Dutch culture around the world. Given West Michigan’s strong Dutch heritage, the KAM is delighted to offer this wonderful exhibition and we are very grateful to Jack Lapp for being willing to share part of his collection with the public in this way.”

The Kruizenga Art Museum is located at 271 Columbia Ave., between 10th and 13th streets. Public visiting hours are Tuesdays through Saturdays from 10 a.m. to 4 p.m.  Admission to the museum is always free.

The Kruizenga Art Museum functions as an educational resource for Hope College and the greater West Michigan community. The museum features two public galleries as well as a study room and climate-controlled storage space for its 7,000-object permanent collection. It is named in honor of a leadership gift from the late Dr. Richard and Margaret Kruizenga, both of whom graduated from Hope in 1952.