Geology Students to Travel from Holland to Halland 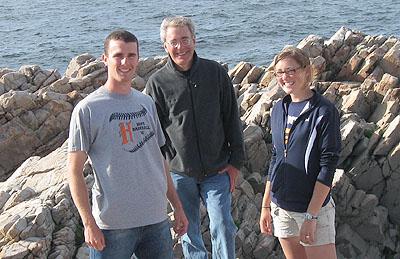 A group of three Hope College geology students will have a unique opportunity to participate in a research project in Sweden later this month.

The students, junior Nate Erber of Rockford, junior Dean Hazle of East Grand Rapids, and sophomore Leah LaBarge of Hudsonville, will spend three weeks as interns with the Geological Survey of Sweden, making detailed maps of rocks along the coast of the province of Halland, the only team from abroad to do so.

"The survey is mapping this area on a very large scale," said the students' Hope faculty mentor, Dr. Edward Hansen, professor of geological and environmental science, who will be accompanying the group.  "We'll go into a few places and map it in a detail that the survey can't."

"What makes us unusual is that we are an American group," Hansen said.  "Most of their other detailed work will be done by Swedish groups.  In fact, I've never heard of another foreign group working with the survey in this way."

Halland is located in the southwest of Sweden, along the Kattegat Sea between the North Sea and the Baltic Sea.

It is the second year in a row that a team of Hope students has participated in the national Swedish project, and the third year that Hansen has taken a group to Sweden (a team in 2009 did similar mapping work through a research project of his own).  LaBarge had also participated in the project last year along with Wyatt Curry of Ontario, Canada, who is graduating this spring. (Pictured above with Professor Hansen are LaBarge and Curry.)

The Geological Survey of Sweden, Hansen noted, is working to produce an overview of the geology of the country as a whole, and given the scale of the project maps areas with a "broad stroke."  He explained that the interns complement the effort by concentrating for a more extended period on specific areas, providing detail that the general survey can't.

Last year, the team spent its three weeks mapping the features of a coastal area approximately two miles long and a quarter mile wide.  The Geological Survey, Hansen said, had finished with the same section in about a day.

The Hope team is doing its work in May not only because the time frame fits well with the college's academic calendar - final exams will have finished the day before the group's May 7 departure - but also because the popular coastal resort area won't yet be in its tourist season.

"May's the perfect time to do field work," Hansen said.  "It's still too cool to have the area filled with summer people."

While the research project itself ends with the students' time in Sweden, the activity does carry with it the potential for further work.  LaBarge, for example, made a presentation about the project during the national annual meeting of the Geological Society of America in Denver, Colo., last October, and is also working with Hansen on an article that he plans to submit for publication.

The students' opportunity to participate as interns stems from Hansen's connections with researchers in the country, who helped him get involved in the project.  Early in his career, Hansen studied deformed and metamorphic rocks in Southern India.  In the latter 1990s, he began charting sand dunes along the Lake Michigan coast.  While in Europe in 2006 through a Fulbright Award connected with the sand dune project, he connected with Swedish geologists studying rocks similar to those with which he had worked in India.