Derek Webb and Sandra McCracken to Perform on March 2 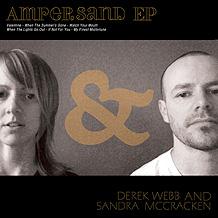 Webb and McCracken will headline the show, drawing from their extensive experience both as a duo and as solo artists.

Webb first gained recognition as a member of the group Caedmon’s Call, with which he has released seven studio albums and various EPs. Webb then began to pursue his own solo career, and as a solo artist, he continued to explore new styles and sounds in his music. He has released six acclaimed solo albums and various EPs.  He is recognized for his innovations in traditional styles as well as his hard-hitting and direct lyrics.  As “Indie Vision Music” has said of his album “Stockholm Syndrome,” “Derek continues to speak his mind on pressing issues in the world around him and to do so over an ever-changing musical landscape.”

McCracken is also a singer-songwriter with widespread experience. She has worked with and written songs for various artists, and she has released five albums of her own. Kristin Garrett of “Christianity Today” has called her album “In Feast or Fallow” “perhaps the most beautiful, poignant collection [of hymns] on this side of the century.”

Webb and McCracken are married, and they have been writing and performing music together for some time. They have released two EPs together and are currently touring the nation. A.L. Harper of “Blogcritics” called their first EP together “hauntingly beautiful, touching, and gently passionate.”

Webb and McCracken will also help lead music during the college’s Chapel service in Dimnent Memorial Chapel during the morning of March 2.

Tickets for the evening concert are $10 for the general public and $5 for Hope students.  Public tickets are available for purchase online at https://tickets.hope.edu/ticketing as well as at the ticket office in the main lobby of the DeVos Fieldhouse. The ticket office is open weekdays from 10 a.m. to 5 p.m., and can be called at (616) 395-7890. Any remaining tickets will be sold at the door, which will open at 7:30 p.m.

The DeVos Fieldhouse is located at 222 Fairbanks Avenue, between Ninth and 11th streets. The DeWitt Center is located at 141 E. 12th St., on Columbia Avenue at 12th Street.