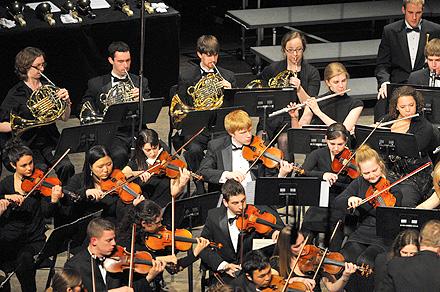 Hope College students take the stage for this fast-paced, musical spectacular, during which audience members hear everything from opera to jazz.

The hardest part for those seeing the show is containing their enthusiasm, at least at first. In the tradition of the quick-moving musical event, audience members are asked to hold their applause until intermission and the end of the performance.

The event will include the involvement of other areas of the arts in honor of President James Bultman, who is retiring at the end of the school year.  There will be a dance piece and musical theatre during the evening’s program, and art work by Hope students in the lobby.

The concert unveils the gifts of all Hope College’s major musical groups, along with soloists, chamber groups and small ensembles.

Tickets for Musical Showcase are $10 each, and may be ordered through at the Hope College Ticket Office located in the main lobby of the DeVos Fieldhouse at 222 Fairbanks Avenue. The ticket office is open weekdays from 10 a.m. to 5 p.m., and may be called at (616) 395-7890.

In addition, tickets may be ordered by phone through Ticketmaster by calling (616) 456-3333. A service fee is added to the cost of each ticket purchased this way.