Final Week of Exhibition Includes Lecture “The Bible and Shakespeare” 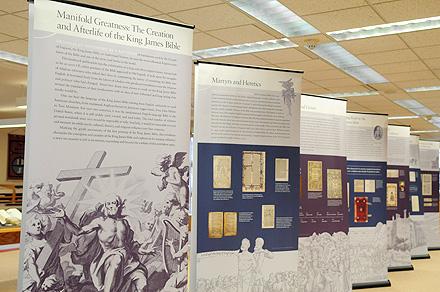 An address by internationally recognized Shakespeare scholar Dr. John Cox of the Hope College English faculty will help mark the closing week of the national traveling exhibition “Manifold Greatness:  The Creation and Afterlife of the King James Bible.”

Cox, who is the DuMez Professor of English at Hope, will present “Shakespeare and the Bible” on Thursday, March 29, at 3 p.m. in Winants Auditorium of Graves Hall.  The exhibition, which is in the Van Wylen Library, is concluding its four-week run the next day.

The public is invited to both the lecture and the exhibition.  Admission is free.

In April 2010, Cox, who is also a past-president of the Conference on Christianity and Literature, was one of three Shakespeare scholars interviewed by National Public Radio for the half-hour program “Shakespeare’s Bible.”  Locally and most recently, he presented the seminar “Shakespeare’s Prayers” during the college’s annual Winter Happening event in January of this year.

Hope is one of only 40 sites nationwide and the only location in Michigan chosen to host “Manifold Greatness: The Creation and Afterlife of the King James Bible,” which was organized to celebrate the 400th anniversary of the first printing of the King James Bible in 1611.  The exhibition opened at the library on Friday, March 2.  Related local programming, culminating in Cox’s address, has included 10 events sponsored by the libraries at Hope and Western Theological Seminary as well as Herrick District Library.

“Manifold Greatness” tells the story of the origins, creation, and impact of the King James Bible, including its influence on English and American literature, and its multifaceted impact on culture and society to the present day.  Displayed on 14 panels, the exhibition consists of high-quality reproductions of rare and historic books, manuscripts and works of art from the collections of the Folger Shakespeare Library and Bodleian Library of the University of Oxford, combined with interpretive text and related images.  The exhibition is displayed on the Van Wylen Library’s main floor and includes an accompanying exhibit of rare books from the library’s rare book collection.

“Manifold Greatness:  The Creation and Afterlife of the King James Bible” was organized by the Folger Shakespeare Library, Washington, D.C., and the American Library Association Public Programs Office.  It is based on an exhibition of the same name developed by the Folger Shakespeare Library and the Bodleian Library, University of Oxford, with assistance from the Harry Ransom Center of the University of Texas.  The traveling exhibition was made possible by a major grant from the NEH.  The additional presentations taking place between March 2 and 29 have been funded in part by the Michigan Humanities Council.

Graves Hall is located at 263 College Ave., between 10th and 12th streets.  The Van Wylen Library is located at 53 Graves Place (11th Street) between Central and College avenues.

Additional information about the exhibition is available online at https://hope.edu/lib/manifoldgreatness/index.html