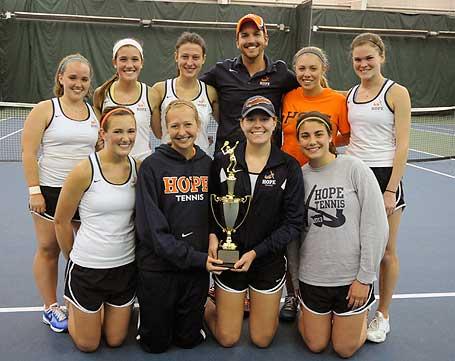 The Flying Dutch earned the MIAA's automatic berth in the championship for the second consecutive year by winning the conference tournament. Hope was also the regular season champion with an 8-0 dual match record.

Hope will be part of a seven-team field competing in a first-second-third round regional to be hosted by Washington University-St. Louis on Thursday thru Saturday.

The Hope/DePauw winner will meet the Coe/Franklin winner in the second round of the single elimination tournament.

The tournament field is comprised of 50 teams. The national championship finals will be hosted by MIAA member Kalamazoo from May 20-22.

The Flying Dutch, coached by Adam Ford, will be making their eighth appearance in the NCAA championship, the third in the past five years. A year ago Coe, Iowa edged the Flying Dutch in a first round match, 5-4.