Dance Marathon is a Record Setter 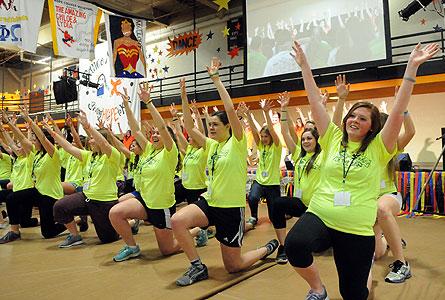 See photos of Dance Marathon, a 15-year Hope College tradition of raising funds to support the Helen DeVos Children's Hospital in Grand Rapids. This year's event has established records for both participation and dollars raised.

See photos of Dance Marathon, a 15-year Hope College tradition of raising funds to support the Helen DeVos Children's Hospital in Grand Rapids. This year's event has established records for both participation and dollars raised.

To emphasize the children that the marathon exists to help, the Dance Marathon’s student organizers coordinate a variety of activities during the course of the school year to connect with families and children served by Helen DeVos Children’s Hospital.  In addition, each of the families is paired with one of the participating student groups.  Events this year included participation in a “Homecoming Hoedown” at Teusink’s Pony Farm in Holland this past fall; a Christmas party at Orange Leaf Frozen Yogurt; an ice-skating party for the families and their student organizations; and a rally for the families and the students who are part of the marathon.

Students involved with Dance Marathon have raised funds for the effort in a variety of ways, from collecting returnable cans, to an event at Buffalo Wild Wings, to a 5K run/walk in November; to writing letters to family and friends. Among other activities, campus groups have sponsored bake sales; students at West Ottawa High School have organized a six-hour mini-marathon; and J P’s Coffee & Espresso Bar hosted a silent auction.

Affiliated with the Children’s Miracle Network Hospitals, Dance Marathon at Hope is one of more than 150 such efforts at colleges, universities and high schools nationwide.

In recognition of the program’s efforts, Dance Marathon received the “Youth in Philanthropy Award” from the West Michigan Chapter of the Association of Fundraising Professionals in the fall of 2003.

In order to help support the vast number of ailing children that visit the hospital each year, all proceeds from the marathon will go directly towards the funding of special programs that are designed to make the young patients’ visits to the hospital more bearable while also helping the families of the children to deal with their illnesses.

Children’s Miracle Network Hospitals is an international non-profit organization dedicated to helping children by raising funds and awareness for more than 170 children’s hospitals throughout North America.

Additional information about Dance Marathon and the Helen DeVos Children’s Hospital, and about how to make a donation, is online at hope.edu/dancemarathon.