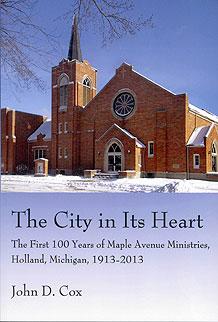 Professor John Cox of the Department of English at Hope College celebrates the first 100 years of Maple Avenue Ministries in the new book “The City in Its Heart.”

The book recounts the founding of the Christian Reformed Church as a denomination in 1857. Cox tells how Maple Avenue Ministries began in 1913 as Maple Avenue Christian Reformed Church. It purchased its first building from Fourth Reformed Church and moved the wooden edifice to the corner of Maple Avenue and 17th Street. The church grew rapidly, attaining a membership of almost 900 within about 10 years of its founding. It remained a successful neighborhood church through the Great Depression and World War II. In 1952, the original building was replaced with a brick structure, in which the church still worships.

Cox’s book documents how Maple Avenue began a steady decline in membership in the 1960s. As the neighborhood changed, the church’s traditional members moved away, and Maple Avenue did not appeal to its new neighbors.

The book tells how the church at last recognized its crisis in the 1970s and took steps to address it. In 1992, it was the first church in Holland to establish a regular program of neighborhood recreation for young people on its parking lot. In cooperation with AmeriCorps and the Boys and Girls Club of Holland, Maple Avenue Church Recreation (or MAC-REC) offered organized sports five days a week during the summer. Maple Avenue was also the first Christian Reformed Church in Holland to appoint an African-American pastor, Eric Gray, in 1995.

During the seven-year pastorate of Rev. David Sieplinga (1996-2003), Maple Avenue began sponsoring several programs, such as Holland Teen Ministries and Jubilee Ministries, to appeal to neighbors. The church became a center of neighborhood renewal, changing its name to Maple Avenue Ministries. Under Sieplinga’s leadership in 1998, Maple Avenue became the first union church of the RCA and the CRC, healing a breach between two Dutch-American Calvinist denominations that had first occurred in 1857.

Maple Avenue was also the first congregation in the Christian Reformed Church to call an African-American woman as its lead pastor. Since 2009, Rev. Denise Kingdom-Grier has pastored the church, and her husband, Christopher “CJ” Grier has been pastor of musical arts. Cox writes that “They are the first married couple in the church’s history to lead jointly in the preaching of the Word and music.” In addition to its neighborhood appeal, Maple Avenue also attracts students from Hope College and Western Theological Seminary.

The new Congregational History Series inaugurated by “The City in Its Heart” is designed “to encourage congregations to produce histories of depth and substance in recording the life of the congregation in order that its past may be better understood for the present and future.”  The series is being edited by Dr. George Brown Jr., who is the G.W. and Eddie Haworth Professor Emeritus of Christian Education at Western Theological Seminary.  The founding general editor of the Historical Series of the Reformed Church in America is Dr. Donald Bruggink, who is a senior research fellow with the Van Raalte Institute and the A. H. Cornell Professor of Historical Theology Emeritus at Western Theological Seminary; and editor-in-chief and publisher for the Van Raalte Press is Dr. Jacob E. Nyenhuis, director of the A.C. Van Raalte Institute and provost emeritus and professor emeritus of Classics at Hope.

The publication of “The City in Its Heart” is part of a milestone year for the Van Raalte Institute, which is celebrating its 20th anniversary. Established in 1994, the Van Raalte Institute is located in the Theil Research Center at 9 E. 10th St. and specializes in scholarly research and writing on immigration and the contributions of the Dutch and their descendants in the United States.  The institute is also dedicated to the study of the history of all the people who have comprised the community of Holland throughout its history.

Since its founding, scholars who have conducted research through the institute have published more than 30 books, including seven through the Van Raalte Press and three co-published with William B. Eerdmans Publishing Co.  In the latter category is the landmark, three-volume history “Holland Michigan:  From Dutch Colony to Dynamic City” by Dr. Robert Swierenga, who has served as the Albertus C. Van Raalte Research Professor at the Van Raalte Institute since 1996 and is retired from the history faculty at Kent State University.  Forthcoming later this spring is a book about the enduring legacy of Albertus C. Van Raalte, edited by Nyenhuis and Dr. George Harinck, who is an honorary research fellow with the Van Raalte Institute and a professor of the history of Neo-Calvinism at the Free University of Amsterdam and a special professor in church history at the Theological Seminary of the Reformed Churches (liberated) at Kampen, the Netherlands.  Also forthcoming is “Hope Beyond Borders: The Life and Letters of Paul Fried” by Dr. Stephen I. Hemenway, professor of English and director of the Vienna Summer School since 1976.