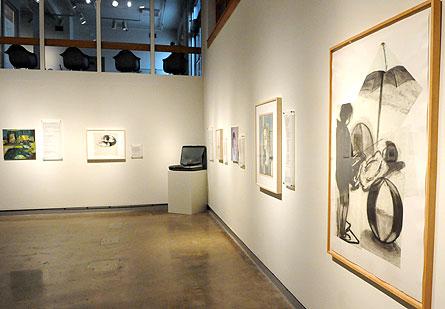 The gallery of the De Pree Art Center at Hope College is hosting an “Art and Poetry” exhibition through Sunday, Sept. 28.

The exhibition has been curated by Charles Mason, founding director of the college’s Kruizenga Art Museum, which is under construction immediately northwest of the De Pree Art Center and scheduled for completion during the 2015-16 school year.  Mason will give a curator’s talk on Friday, Aug. 29, at 4 p.m. in Winants Auditorium of Graves Hall, with a reception following in the gallery from 5 p.m. to 6 p.m.

The combination of poetry and art for the exhibit is a natural connection for Mason.

“Painting and poetry have long been considered complementary arts in both Western and Eastern cultures.  The exact nature of the relationship between the two arts has been the subject of much critical debate for many centuries, but on a basic level both arts often describe similar scenes and situations and attempt to convey similar feelings and moods,” Mason explains in his curatorial statement. “On a deeper level, painters and poets both apprehend life through their imaginations, condensing ideas and filtering details to provide fresh perspectives on the world.”

The exhibition, which opened on Friday, Aug. 22, employs works from the college’s Permanent Collection, along with works made for the exhibition by Hope College students, faculty, and staff. In some cases, visual images were made in response to poems, while at other times the poems are a response to a visual image.

Mason says “The goal of the exhibition is to increase awareness of the power of visual art and poetry to magnify one another and to enrich all our lives.”

The De Pree Art Center is located at 160 E. 12th St., on Columbia Avenue at 12th Street, and the gallery is open Mondays through Saturdays from 10 a.m. to 5 p.m. and on Sundays from 1 p.m. to 5 p.m. Graves Hall is located at 263 College Ave., between 10th and 12th streets.  Both buildings are handicapped accessible.