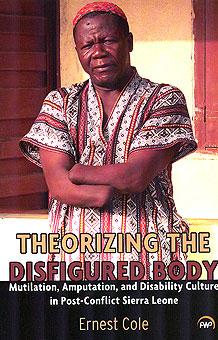 The civil war in Sierra Leone has been over for more than a decade, but changes are needed if thousands of survivors, and the nation itself, are to move beyond the conflict, according to a new book by Dr. Ernest Cole of the Hope College English faculty.

Cole, who was born, raised and began his teaching career in Sierra Leone, explores the practice and aftermath of punitive amputation during the 1991-2002 war in “Theorizing the Disfigured Body: Mutilation, Amputation, and Disability Culture in Post-Conflict Sierra Leone,” published earlier this year by Africa World Press of Trenton, New Jersey.

An estimated 5,000 civilians—men, women and children--had arms, legs or hands amputated by anti-government rebels during the war, which saw neighbor pitted against neighbor.  Most are now isolated and ostracized, Cole says, their injuries having become their primary identity and with it the perception that they have nothing to contribute.

“As I argue, predominantly, the crucial issue in post-conflict Sierra Leone is that of image and function that confronts amputees,” said Cole, an associate professor of English and Towsley Research Scholar at Hope, where he has taught since 2008.

“We must begin to imagine disability in a new light if amputees are to be accepted into society again.  How do we provide the opportunities for them to reclaim their humanity, to reclaim their identity and to lead productive lives?” he said.  “How the amputee addresses this new image in order to negotiate a new sense of self and function is crucial to healing, forgiveness and reconciliation.”

Cole has been conducting research on the topic for the past five years, including through multiple trips back to Sierra Leone since 2009 to conduct interviews with scores of amputees and others.  In addition to the book, his work has included creating a series of video-based interdisciplinary learning modules in the college’s New Media studio with students in the digital humanities and in the Mellon Scholars program at Hope.

His interest in the topic began in February 2000, as he watched a CNN documentary about the war that conveyed the brutality.

“I was captivated by the scenes of amputation, and the choice of the human body as a course of punishment was fascinating to me,” he said.  “What motivated that choice became the impetus for investigating the logic of punitive amputation and the relationship between the victim and the perpetrator.”

“It is a deliberate, calculated, and cruel decision of a victimizer to inflict bodily harm as punishment on another person,” Cole said.  “In its epistemologies of power, control, domination, abuse and cruelty, punitive amputation proffers a different psychological reality to the individual, and his relationship to his body and his society is anchored in feelings of resentment to the victimizer and pain at the loss of the limb.”

“In the culture of Sierra Leone, the body assumes a psycho-social dimension in everyday life,” he said.  “In Krio, the lingua franca in Sierra Leone, Sierra Leoneans greet one another by saying ‘Ow de bodi?’  Loosely translated, it means ‘how is the body?’  However, in the cultural context of Sierra Leone, ‘Ow de bodi?’ goes way beyond an inquiry into the physical state of the individual.  It is an inquiry into the physical, mental, emotional and spiritual state of the person.  It is about ‘shalom,’ the overall state of harmony of being, and the working together of body, mind, and spirit.  It is about man in relation to himself, others, and his environment.”

“Therefore, when the body is mutilated or amputated, it is both an individual destruction of mind and body, a total emasculation of self, and a rupture of kinship or community ties with the perpetrator,” he said.

He noted that re-engagement and purpose for the amputees can take many forms.  More than 350 young men, for example, participate in the Single Leg Amputee Sports Club, with some even traveling abroad to compete and to help teach amputee soccer to others.

“It becomes evident that amputation is not disability and that far from handicap and stigma, the players are well respected and productive members of their communities engaged in the highly reputable and worthy enterprise of peace building, non-violence and reconciliation through soccer,” Cole said.

Cole completed his bachelor’s and master’s degrees in Sierra Leone, and began his career conducting research and teaching English at Fourah Bay College. At the outbreak of the civil war, he left for The Gambia, where he taught at The Gambia College for a number of years. He subsequently pursued a doctorate at the University of Connecticut; he completed the degree in 2008, the same year that he joined the Hope faculty.

In 2012, he was one of 15 scholars nationwide chosen to participate in that year’s Lilly Fellows Program Summer Seminar for College and University Teachers, “Teaching Peace and Reconciliation: Theory and Practice in Northern Ireland.”  Hope named him a “Towsley Research Scholar” in 2011 in support of his research.  He discussed his work during the college’s Winter Happening event in February 2011, presenting the seminar “Negotiating Amputation, Forgiveness and Reconciliation,” and was among the presenters during the college’s September 2012 Critical Issues Symposium, which examined “Reconciliation: Hope in a Divided World.”

Paperback copies of “Theorizing the Disfigured Body: Mutilation, Amputation, and Disability Culture in Post-Conflict Sierra Leone” are available for $24.95 at the college’s Hope-Geneva Bookstore.  The Hope-Geneva Bookstore is located on the ground level of the DeWitt Center, 141 E. 12th St., and can be called at 800-946-4673 or (616) 395-7833 or emailed at bookstore@hope.edu.