August 25, 2014 — by Hope PR
The college’s chapter of Mortar Board won multiple awards during the organization’s national convention earlier this month, honored for activity during the 2013-14 school year. Pictured at the event are faculty co-advisors Dianne Portfleet and Rob Pocock, and current vice president Jillian Sommerville and membership chair Amy VanderStoep. 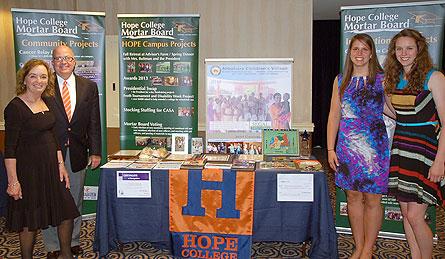 The Hope College chapter of Mortar Board has again earned multiple honors during the national organization’s annual summer conference.

The awards program recognized activities during the 2013-14 school year.  Hope received a “Golden Torch Award” and 25 “Project Excellence” awards, the most of any chapter in the nation.  The conference was held on Friday-Sunday, Aug. 1-3, in Atlanta, Georgia.

The college’s Alcor chapter of the honorary society has received multiple awards during each of the past several years, including being named the top chapter during the national conference in 2010.  There’s a five-year wait before the chapter will be eligible to be considered for the top award again.

The chapter’s 25 “Project Excellence Awards” follow having received 19 awards last year, 17 awards in 2012, 12 awards in 2011 and eight awards in both 2009 and 2010.  Among the projects that Hope’s awards recognized were:  the “Wearing of the Blue Breakfast” for students on the Dean’s List; the Alumni Book drive, which enabled the chapter to contribute more than $12,000 to Woodside Elementary School; Dance Marathon participation, raising more than $23,000, the highest total by one of the student organizations involved; the Friendship Prom; the Thanksgiving dinner for international students; the Last Lecture Series; the Rwandan Project with Nibakure Children’s Village, supplying funds for a solar panel so the village could attach to the electrical grid, and making water filters for the village; and full college scholarships for several students in Tanzania.

Mortar Board is a national honor society that recognizes college seniors for outstanding achievement in scholarship, leadership and service, and provides opportunities for continued leadership development, promotes service to college and universities, and encourages lifelong contributions to the global community.  Since its founding in 1918, the organization has grown from the four founding chapters to 230 collegiate chapters with nearly 250,000 initiated members across the nation.

The Alcor chapter has existed at Hope since the 1936-37 academic year, although it did not become part of the national Mortar Board organization until 1961.  The Hope chapter had 36 members during the 2013-14 school year.

The chapter is advised by Dianne Portfleet, associate professor of English, and Rob Pocock, adjunct assistant professor of communication.  Portfleet and Pocock both attended the conference on behalf of Hope along with senior Jillian Sommerville of Plymouth, who is the chapter’s vice president during 2014-15, and senior Amy VanderStoep of Holland, who is the chapter’s membership chair during 2014-15.