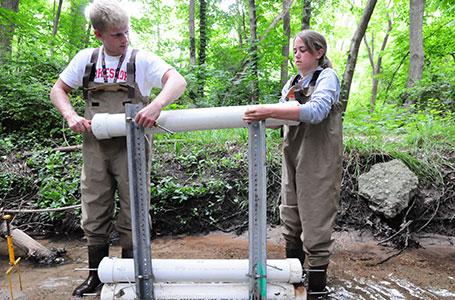 A major gift from The Herbert H. and Grace A. Dow Foundation of Midland is enabling Hope College to establish a new residential learning community in the sciences focused on helping improve the Macatawa watershed.

The STEM Scholars program—STEM is shorthand for science, technology, engineering and mathematics—will begin next fall by gathering 24 incoming freshmen who will live together in the same residence hall, share courses and become immersed in socially relevant research projects.  The $3 million gift will endow the program in perpetuity, with a new cohort of students entering each year.

“Hope has long been recognized nationally for excellence in preparing leaders in the natural and applied sciences, in part because our undergraduates have exceptional opportunities to conduct scientific research in real-world contexts,” Knapp said.  “The focused and nurturing learning community provided by the STEM Scholars program will build on that tradition, enhance student success through all four years of college and help meet the nation’s need for highly qualified professionals in STEM fields.”

Foundation president Mike Whiting noted that the foundation values the opportunity to again partner with the college in preparing students to become the next generation of STEM leaders.

“The Herbert H. and Grace A. Dow Foundation is pleased to support the Hope College STEM Scholars Program in providing outstanding, transformational experiences for students,” Whiting said.  “The foundation is rooted in scientific achievements, and the STEM Scholars Program complements our mission to promote innovative research and applied science. Educational opportunities that engage students in addressing real-world problems using their STEM knowledge and skills will not only motivate students to study science, engineering and mathematics, but will prepare them to pursue STEM careers, creating economic and social benefits for our state, region and nation.”

The program’s focus on the Macatawa watershed will include an on-going partnership with Project Clarity, a broad-based community initiative established in November 2012 that seeks to remediate the water quality issues of Lake Macatawa and the watershed. The STEM Scholars program’s inaugural director, Dr. Catherine Mader, noted that the watershed and partnership are an ideal fit because the need and the breadth of the effort--both the science and the community-wide collaboration—provide meaningful lessons for every discipline.

“Another reason that we chose to focus on Project Clarity is that this issue needs experts in many disciplines studying the problems and designing solutions,” she said.  “Every area of STEM expertise is related—and we also need skills beyond the STEM fields.  We’re going to be pulling the students’ entire liberal arts education into what they’re doing.”

Members of the Hope faculty have been engaged in research on the Macatawa watershed for more than 15 years, working collaboratively with students.  The new STEM Scholars program will build on the current research program of chemist Dr. Graham Peaslee and biologist Dr. Aaron Best, whose findings have been playing an integral role in the work of Project Clarity.

Dick DeVos, Project Clarity co-chair, noted that he is excited about the new partnership with the college.  “I am delighted that Hope College is expanding its collaboration with Project Clarity,” DeVos said.  “The team’s findings will benefit the watershed and help discover solutions for our community’s valuable natural resources.”

During their first year in the program, the participating students will live together and enroll in first-year interdisciplinary seminar and research courses focused on the Macatawa watershed.  In addition to studying the impact of human development on the local watershed over the past century, the students will work with STEM professionals and regional community members to better understand the scientific problems within the watershed.

As upperclassmen, the students will continue to be involved as mentors of the new students entering the program, in addition to continuing to participate in research and outreach.

The residence-based approach that is integral to the STEM Scholars program applies a model already followed by two other programs at the college:  the long-running Phelps Scholars Program, established in 1999, which engages new students in exploring topics related to diversity; and the Emmaus Scholars Program, established in 2013, in which upperclassmen consider how they can blend their faith, academics and life experiences to make a difference in the world.

The Herbert H. and Grace A. Dow Foundation was established by Mrs. Grace A. Dow in 1936 in memory of her husband, Dr. Herbert H. Dow, founder of The Dow Chemical Company. The Trust Agreement specifies that the income of the trust is to be used “for religious, charitable, scientific, literary, or educational purposes for the public benefaction of the inhabitants of the City of Midland and of the people of the State of Michigan.”

The college’s Herbert H. and Grace A. Dow Health and Physical Education Center, which opened in 1978, is named in honor of a leadership gift from the foundation, and additional construction projects supported by the foundation through the years have included the Van Wylen Library, which opened in 1988; the renovation of Van Zoeren Hall in the early 1990s; the A. Paul Schaap Science Center, which opened in 2003.  The foundation previously made major endowment gifts to Hope in 1982 and 2011, the latter for students engaged in collaborative research in biochemistry, chemistry and molecular biology.

Hope is currently recruiting students to be in the STEM Scholars program next fall.  Those interested in learning more should contact Mader at mader@hope.edu.