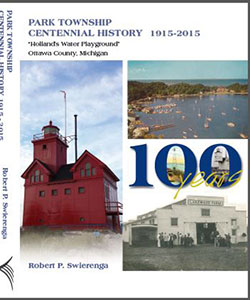 “Park Township Centennial History, 1915-2015” is being published this month by the Van Raalte Press of the A.C. Van Raalte Institute.  The book was commissioned by the Park Township Board of Trustees and is being released in conjunction with the township’s Aug. 15-23 anniversary celebration.

Park Township is in the southwestern corner of Ottawa County, and is located along the Lake Michigan coast west of the city of Holland both north and south of Lake Macatawa.  Originally part of Holland Township, it became an independent township in October 1915.

The township occupies approximately 20 square miles, with more than 90 percent of its area north of Lake Macatawa. The township’s population was 17,802 in 2010.

Although “Park Township Centennial History, 1915-2015” emphasizes the century since the township received its charter, it begins the story decades earlier, when the Ottawa Indians lived in the area. It continues with discussion of communities envisioned but never built by land speculators in the 1830s and the arrival of the Dutch immigrants led by the Rev. Albertus C. Van Raalte in 1847.

Across 28 chapters and nearly 250 pages, the book progresses from the township’s early history and founding through discussion of features such as Holland Harbor, resorts, shipping, churches and cemeteries, schools, agriculture, the fairgrounds, the airport, subdivisions, township administration, public safety, and parks and trails.  It includes 20 maps and 260 photographs, many from private collections and never before published, featuring township landmarks and life from the 19th century through the present.

Swierenga has served as the Albertus C. Van Raalte Research Professor and adjunct professor of history at Hope since 1996, when he retired from the faculty of Kent State University.  He is the author of numerous books on Dutch migration and heritage, including the three-volume “Holland, Michigan: From Dutch Colony to Dynamic City,” published by the Van Raalte Press and William B. Eerdmans Publishing Co. in 2014.

Established in 1994, the A.C. Van Raalte Institute is located in the Theil Research Center at 9 E. 10th St. and specializes in scholarly research and writing on immigration and the contributions of the Dutch and their descendants in the United States.  The institute is also dedicated to the study of the history of all the people who have comprised the community of Holland throughout its history.  Since its founding, the institute and its affiliated scholars have published nearly 40 books.

Copies of “Park Township Centennial History, 1915-2015” cost $20 each including sales tax, and are available at the Park Township Offices.  The offices are open weekdays from 8 a.m. to 5 p.m. and located at 52-152nd Ave., near the intersection of 152nd Avenue and Ottawa Beach Road.

The book will also be available for purchase during a book-signing event on Wednesday, Aug. 19, from 2 p.m. to 4 p.m. at the Pump House Museum, located at 2282 Ottawa Beach Road, next to the U.S. Coast Guard Station near Holland State Park; and during the township’s centennial celebration that is taking place on Saturday, Aug. 22, from noon to 10 p.m. at Winstrom Park, located at 160th Avenue and Perry Street.