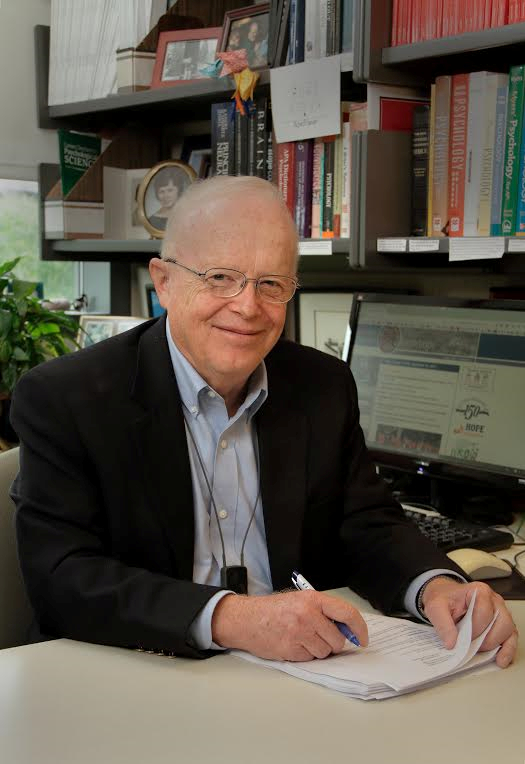 Dr. David Myers of the Hope College psychology faculty has been elected a Fellow of the prestigious American Association for the Advancement of Science (AAAS).

Election as an AAAS Fellow is an honor bestowed upon AAAS members by their peers because of their scientifically or socially distinguished efforts to advance science or its applications.  Myers was chosen for distinguished contributions to the field of social psychology and communication of psychological science to students and the public.

A total of 347 AAAS members have been elected Fellows this year, and Myers is one of only three from undergraduate colleges and only eight in psychology.  Most Fellows are from institutions such as national or private research laboratories, scientific associations and comprehensive universities.

The new Fellows will be formally announced in the AAAS News & Notes section of the journal Science on Friday, Nov. 27, and will be honored on Saturday, Feb. 13, during the 2016 AAAS Annual Meeting in Washington, D.C.

“David Myers’ designation as an AAAS Fellow is a recognition of his career-long devotion to educating all of us about the power of science in shaping our individual and collective lives,” said Dr. Scott VanderStoep, who is the dean for the social sciences and a professor of psychology at Hope—and graduated from the college in 1987 with a psychology major. “As one of psychology’s public intellectuals, his writing regularly reminds us of the importance of making decisions based on sound methodology, rigorous data analysis and wise discernment and interpretation of results. Dave’s message to us is information over instinct, wisdom over whim. Through the writing of his texts and popular-press books, he has been a professor to millions of students. I’m proud to be one of them.”

A social psychologist who has been a member of the Hope faculty since 1967, Myers has digested psychological research for the public through articles in four dozen magazines, from Scientific American to Christian Century, and through 17 books, including general interest books and textbooks.  His scientific writings, supported by National Science Foundation grants and fellowships, have appeared in three dozen academic periodicals, including Science, the American Scientist, the American Psychologist and Psychological Science.

In recognition of his efforts to transform the way America provides assistive listening for people with hearing loss (see hearingloop.org), he received “the 2011 American Academy of Audiology Presidential Award,” the Walter T. Ridder Award from the Hearing Loss Association of America, and Oticon’s 2013 hearing Advocacy Award. In addition, he represents Americans with hearing loss as a member of the Advisory Council of the National Institute on Deafness and Other Communications Disorders.

Myers held an endowed professorship at Hope, as the John Dirk Werkman Professor of Psychology, from 1983 to 2007.  The college’s graduating class in 1972 presented him with the Hope Outstanding Professor Educator (H.O.P.E.) Award, and in 1974 invited him to present the commencement address.

Myers completed his bachelor’s degree at Whitworth College, and his master’s and doctorate at the University of Iowa.  He holds honorary degrees from Northwestern College, Whitworth College and Central College.

The American Association for the Advancement of Science (AAAS) is the world’s largest general scientific society, and publisher of the journal, Science (sciencemag.org) as well as Science Translational Medicine (sciencetranslationalmedicine.org) and Science Signaling (sciencesignaling.org). AAAS was founded in 1848, and includes 254 affiliated societies and academies of science, serving 10 million individuals. Science has the largest paid circulation of any peer-reviewed general science journal in the world, with an estimated total readership of 1 million. The non-profit AAAS (aaas.org) is open to all and fulfills its mission to “advance science and serve society” through initiatives in science policy,

The tradition of AAAS Fellows began in 1874. Currently, members can be considered for the rank of Fellow if nominated by the steering groups of the association’s 24 sections, or by any three Fellows who are current AAAS members (so long as two of the three sponsors are not affiliated with the nominee’s institution), or by the AAAS chief executive officer. Fellows must have been continuous members of AAAS for four years by the end of the calendar year in which they are elected.

Each steering group reviews the nominations of individuals within its respective section and a final list is forwarded to the AAAS Council, which votes on the aggregate list. The Council is the policymaking body of the Association, chaired by the AAAS president, and consisting of the members of the board of directors, the retiring section chairs, delegates from each electorate and each regional division, and two delegates from the National Association of Academies of Science.