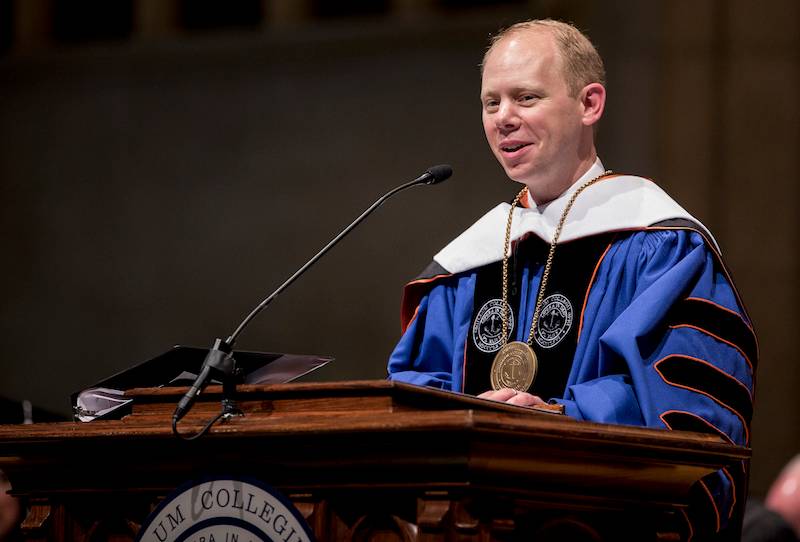 Scogin, a 2002 Hope graduate who was named the college’s president-elect in December and took office on July 1, has consistently cited the business model of higher education as one of his top priorities.

“The whole world is asking why college has gotten so expensive,” he said during Friday’s ceremony, which was held in the college’s Dimnent Memorial Chapel as well as live-streamed for viewing worldwide.  “What if Hope could take the lead in solving that puzzle?”

“We are taking a hard look at ways we can rethink our cost structure,” Scogin said.  “But organizations do not shrink on the way to greatness.  Our path toward greatness involves growing, growing our scholarship support.”

Scogin acknowledged that fully funding tuition won’t be easy.  “This is a big ambition,” he said.  “So large that it probably sounds crazy and unachievable.”

“Yet, to paraphrase President Kennedy when he charged our nation with the seemingly crazy and unachievable mission of going to the moon, we choose this ambition.  We choose this, not because it is easy; we choose this because it is hard,” he continued.  “We accept this challenge because we believe so deeply in the transformative experience that Hope College offers.”

Scogin noted that his commitment to the goal is reinforced by his first-hand experience both with the impact of a Hope education and the challenge of financing college.

“To me this is personal,” he said.  “My own life was forever transformed by this institution.  I grew up in a modest middle-class family.  I wouldn’t have been able to afford Hope College without scholarship support.  And even with scholarships, I still graduated with significant student loan debt.  Keep in mind, this was two decades ago, when the price of tuition was less than half what it is today.”

Scogin’s journey after Hope included completing a master’s degree in public policy at the Kennedy School of Government at Harvard University; senior positions with both the New York Stock Exchange and the U.S. Treasury Department; and, immediately prior to becoming the college’s president, serving as chief administrative officer at the global financial advisory firm of Perella Weinberg Partners in New York City.

He explained that the tuition initiative is consistent with the inspiration provided by one of the scriptural passages read earlier during the ceremony, Isaiah 43:19, in which eternal God also acts upon creation in new ways: “See, I am doing a new thing! Now it springs up; do you not perceive it? I am making a way in the wilderness and streams in the wasteland.”

In the same way, Scogin said, Hope, which was chartered by the State of Michigan in 1866 and is affiliated with the Reformed Church in America, can remain true to its historic roots while acting in new ways to meet the challenges of the present.

The college was established, he noted, with an emphasis on both world-class academics and a vibrant faith environment, to transform not only students in what was then still a young community of Dutch immigrants but the world.  “All this was inspired by [the founders’] fundamental belief that advancing God’s kingdom in this life demanded more than zeal and passion — it required education,” he said.

Along with addressing Hope’s cost as his top priority, Scogin said that he hopes to see the college provide leadership in demonstrating the continued value of a liberal arts education in preparing students for both life and work.

“While the pendulum of higher education seems to be shifting toward vocational training, we at Hope believe college is about more than grooming young people for work,” he said.  “Of course, Hope does a great job preparing students for fulfilling careers.  But a liberal arts degree also instills a passion for learning…  the chance to experience the unexpected… the opportunity to make sense of one’s place in the world.”

“Over the next five years, according to the Bureau of Labor Statistics, up to one-third of our workforce will transfer not just to a new job, but to a new occupation,” Scogin said.  “A 2016 study by two Oxford economists estimates that nearly half of U.S. jobs are at risk of being automated within two decades.”

“In my view, the rise of automation means the most successful leaders of the future will be those who are especially human,” he said.  “As more jobs are automated, employers will more highly value people who bring curiosity, creativity, wit and warmth to the workplace…  people who can work across cultures, make a human connection and live by a strong moral compass. Who better to meet this rising need than Hope College?”

Hope, Scogin said, is also positioned well not only by its historic character but present strength.

“Today, we are a school that belongs on the world stage,” he said.  “We are ranked by U.S. News as 23rd in the nation for undergraduate research, tied with Cornell and Swarthmore.  We were the first private liberal arts college — and remain one of the few — to have accredited programs in all four areas of fine arts: music, art, dance and theater.  We have championship-level athletics in 22 sports, and we are consistently recognized by the NCAA for having student athletes who excel academically.  We have pivoted beautifully from a denominational school to a fully ecumenical Christian school.  At a time when churches and denominations around the world are dividing, Hope is a place that brings all Christians together…  a place where Greek Orthodox, Catholics and all protestant traditions can come together and say, ‘We may disagree on some things but we share a handful of big convictions that unite us.’”

“I can’t think of a better position from which to transform the world,” Scogin said.