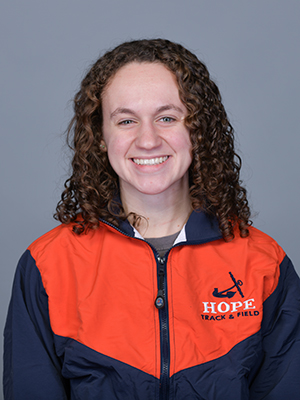 Chelsea Miskelley is driven to go the distance, whether it be as a student, researcher or a runner.

Her excellence as a Hope College student-athlete has been lauded. MIskelley is a member of the 2019-20 Academic All-America® NCAA Division III Track and Field/Cross Country Teams, as selected by the College Sports Information Directors of America (CoSIDA).

One of 94 honorees, Miskelley is a second-team selection on the women’s team. She recently graduated from Hope College after completing her major in biochemistry and molecular biology with a 3.98 grade point average.

“This recognition means a lot to me. I am really honored to have been selected for this,” Miskelley said. “I just wanted to say thank you to my teammates, my wonderful coaches, and the athletic department at Hope for helping me succeed and supporting me since Day 1. Also, thanking my wonderful professors at Hope for expecting excellence from us students and supporting us. The community at Hope fostered my ability to succeed. I know I wouldn’t have been able to do any of this without them.”

Despite the cancellation of spring competition during COVID-19, CoSIDA continued its sponsorship of the Academic All-America® awards program. Student-athletes were selected based on career statistics.

Miskelley joins a long list of Hope student-athletes who have received Academic All-America® recognition from CoSIDA.

"Chelsea is among the top one percent of student-athletes I have worked with in over 30 years of higher education, truly a gifted student, researcher, athlete and leader,” said Mark Northuis, head cross country coach and assistant track and field coach who works with distance runners. “Her career at Hope College is a living testimony of the Division III model of Discover, Develop, and Dedicate. She has demonstrated an inquiry mind in the classroom and laboratory, developed personally as a scholar and an athlete, and is committed to a life of learning and service of others."

Miskelley has begun to apply to medical schools. She is taking a gap year and currently is working at Zeeland Community Hospital as a nurse technician.

Miskelley is a two-time, All-MIAA honoree in outdoor track and field.

In the classroom, Miskelley earned All-Academic honors from the United States Track and Field and Cross Country Coaches Association last fall. In order to qualify for All-Academic distinction, student athletes must have a cumulative GPA of at least 3.30 on a 4.0 scale and finish in the top-25 percent of their respective regional championship meet.

Miskelley also made the Michigan Intercollegiate Athletic Association Academic Honor Roll throughout her career at Hope.