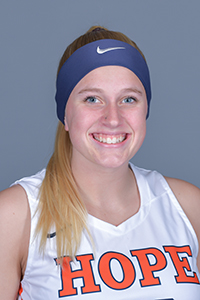 Whether a game-sealing block to preserve an NCAA Tournament second-round victory, or a game-winning jumper against a conference rival as time expired, Kenedy Schoonveld delivered when it mattered most for the Hope College women’s basketball team.

The 5-10 guard was an exceptional teammate as well, spearheading the 29-0 and top-ranked Flying Dutch to the only perfect campaign in NCAA Division III this season.

“She hit big shot after big shot in tight games,” head coach Brian Morehouse said of Schoonveld. “Whether it was the game winner versus Albion, or huge shots in big moments like Trine and Illinois Wesleyan, the moment was never too big for her.”

Schoonveld is one of three from Hope this season to be recognized by the WBCA. Junior center Olivia Voskuil earns honorable-mention All-America honors. Head coach Brian Morehouse is the 2020 United States Marine Corps/WBCA NCAA Division III National Coach of the Year,

“I’m so excited for Kenedy and Olivia!” Morehouse said. “To have the WBCA, which is an organization I hold in the highest regard, recognize these two great student-athletes is really meaningful.”

In February, Schoonveld headlined the All-MIAA First Team after the league’s coaches chose her as the Most Valuable Player. It was her third All-MIAA first-team selection.

“Kenedy had a tremendous year as she continued to grow in her game,” Morehouse said. “The mental part of the game is where she made the biggest advances this year in understanding matchups, advantages, and learning how to give the team what we needed based on the situation.

“Kenedy used her length and strength to exploit smaller guards. If they put someone taller on her, she went off the dribble and shot it over them from 3. She had a lot of additional pressure placed on her after Sydney Muller’s injury, and she stepped up to every challenge.”

Voskuil joined Schoonveld on the All-MIAA First Team. She repeated as the league coaches’ choice as the Defensive Most Valuable Player.

“What a year of growth and domination for Olivia,” Morehouse said. “She led our team to a No. 1 defensive rank in the U.S. She’s the most active and athletic defender we’ve ever had. She’s such a rare combination of speed, quickness, and length. Olivia allows players around her to do their job in our defense because she will have their support when they force people to go toward her area on the floor.

“Couple all of this with a much improved offensive game, and you have an honorable mention All American.  Olivia really grew on the offensive end this year as she scored it around the basket, especially off the dribble. With guard skills playing against post players, she really exploited those matchups.”