The Pull is an annual tug-of-war contest held across the Black River. It is one of the nation's oldest standing college traditions. Competitors are 36 members of both the freshman and sophomore class.

More Information about The Pull 2021 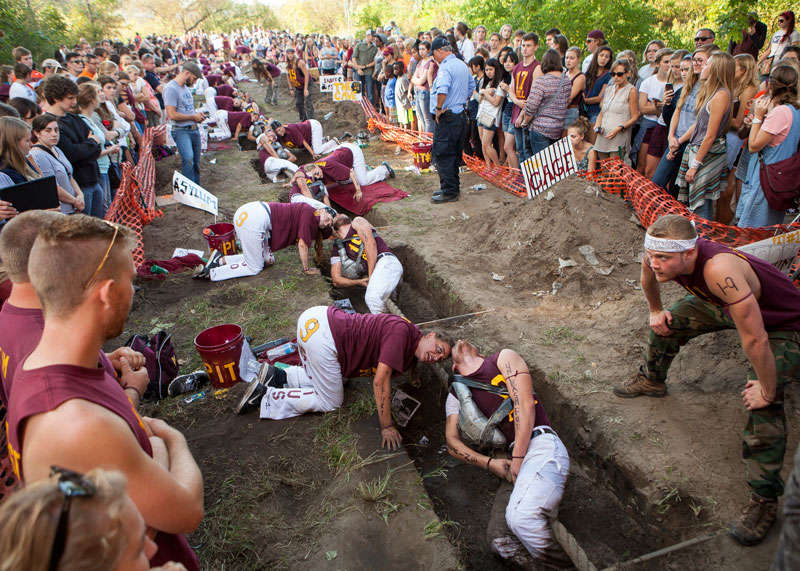 There’s nothing quite like the Pull. One of the longest-running college traditions in the country, the three-hour tug-of-war has been active for more than 120 years.

In a Hope College tradition that began in 1898, freshman and sophomore teams face one another on a crisp fall day, tethered together by a rope that each intends to claim. Three weeks of practice in the month of September lead the teams to Pull day. Each team has a up to 18 “pullers” on the rope and an equivalent number of “moralers” who relay directions and help keep the pullers focused.

“Come out and see the tug-of-war between the Sophomores and the A’s and Freshmen.”

Every year, the pullers push themselves to the limit (many say past the limit), by working in unison with team mates who are also giving their all. They face an opponent that they cannot see, but who they know are doing the same.

A puller waits for the signal from the moraler — their eyes, since they cannot see the signals while lying in the pit — and then heave for all they’re worth, willing the rope home. Then they lock in and try to keep the other side from doing the same.

This is repeated again and again.

In three hours, maybe less, the contest will be over. The memories, though, will last a lifetime.

Hope College Formula Racing earned 14th place overall out of the 90 teams that participated in the Formula SAE competition held at Michigan International Speedway on Wednesday-Saturday, May 18-21.