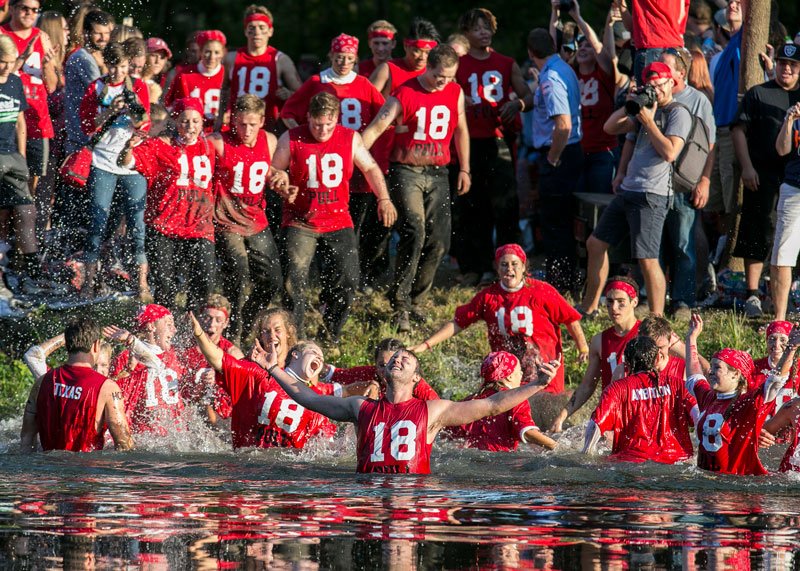 During the Pull, each team has up to 18 students on the rope known as “pullers,” and an equivalent number that act as guides and morale boosters, or “moralers.” The freshmen are coached by the junior class, while the sophomores are instructed by the seniors. The coaching arrangement also leads to a rivalry between the even-year and odd-year classes.

“I was on the Pull team in ’59 and ’60, and my wife Marilyn Slot was my morale girl both years. In fact we met on the practice field.”

The Pull tug-of-war was believed to have first been held in 1898. The event is mentioned in the November, 1898, issue of the college’s student newspaper, The Anchor, although no record of the outcome appears. The informal nature of the event in its early years means that there are few details from the Pull’s early history (pre-1909). We know that there were at least five years that the Pull was not held: 1918, 1943 and 1944 (war years); 1957 (when, according to the student paper at the time, a flu epidemic on campus prompted its cancelation); and 2019 (when it was canceled because of the global COVID-19 pandemic).

The event was originally held on a Friday afternoon; however, the event was moved to Saturday in 1993 to allow more to attend and to avoid conflicts with the college’s academic schedule.

“We, the freshmen of the 1913 class, pulled the sophomores thru the creek, which was somewhere east of the Pilgrim Cemetery — they hardly got their feet wet. The following year, the first pull across Black River was held.”

There are only three buildings on campus that are older than the Pull:

The shortest Pull, held in 1956, was 2 minutes and 40 seconds long. The longest Pull, held in 1977, was 3 hours and 31 minutes long, and was called a draw. The event is now limited to three hours maximum, a change implemented in 1978. At the end of the three hours, the judges may declare a winner by measuring gain.

It is possible for the rope to break, such as happened in 1974. In that year, a new one was obtained and the match was held on the following Monday. The rope stretches, and thus both sides can finish the Pull having gained rope. This happened in 1999, where the sophomore class of ’02 won having only gained 6 feet, 1 inch more than the freshmen class of ’03. The margin of victory can be slim. In 1995, for example, the sophomore class of ’98 won by only 2 feet, 10 inches.

“In the 1974 Pull, the freshman class of ’78 and the sophomore class of ’77 reeled in the rope at the gun, threw the first heaves, and broke the rope with ‘power never seen on any pull teams before or since.’ The rope was tied in a knot, put back in the boat, reeled in, and broken again on the first heave. After this, the pull was rescheduled.”

Only two classes have won all four Pulls, two as participants and two as coaches: 1934 and 1936.

See a full record of wins and participants

Find directions and a map to the Pull site

Adam Peckens, who is laboratory director of engineering at Hope College, has received the national 2022 Peter J. Bosscher Faculty Advisor Award for Outstanding Leadership from Engineers Without Borders-USA.