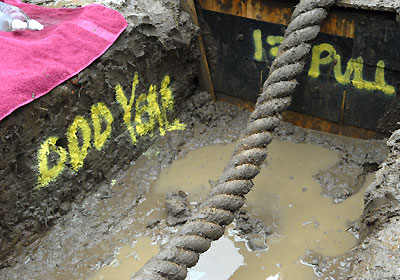 It started in a different era. But it's aged well.

When the 1898 Pull (the first on record) was held, Victoria was queen of England, and William McKinley was president of the United States. Teddy Roosevelt and the Rough Riders hadcharged up San Juan Hill just a few months before. Closer to home, the founding of Hope College in 1866 was still a living memory — as, for that matter, was the 1847 founding of Holland. Gerrit J. Kollen, Class of 1868, was Hope’s president.

The first Pull reference is an all-too-brief note in the Anchor of November, 1898: “Come out and see the tug-of-war between the Sophomores and the A’s and Freshmen.”

Those students of long ago can’t have had any notion of what they started, but what a storied legacy it is. The event endures still, with two teams of 36 (18 “pullers” on the rope, and 18 “moralers” serving as their eyes) battling across the Black River every fall.

And, grueling though the experience is — indeed, in part because it is grueling — many participants compliment it as a highlight of their time at Hope.

There’s no word later in 1898 of the outcome of that year’s Pull. In fact, references to the Pull are absent entirely for the next several years.

The waters are even muddied a bit by notes from two alumni who were students in 1909 and wrote years later to explain that the event originated then.

The current hypothesis is that the tug-of-war took a hiatus sometime after 1898, so that those involved in the 1909 event weren’t aware that there’d been a freshman-sophomore tug-of-war before them (or, at least the letter-writers weren't aware of it). Given the 1898 Anchor reference and an anecdotal history of 50-plus years in support of the 19th century start, the college has stuck with the idea that it’s all part of the same tradition.

But… just who were the “A’s,” and why were they teamed with the freshmen that first year?

Back in 1898, Hope operated a high school. Actually, the high school predated the college itself — Hope became a way for the local high school graduates to attend college close to home (imagine traveling all the way to Rutgers in New Jersey, which at the time had ties to the Reformed Church, and was one likely alternative, in the 1860s... ). The four grade levels in the high school were designated with letters, and the “A’s” were the seniors.

In the fall of 1898, the sophomore class consisted of 27 men, while the freshman class had only 16 men and two women. No doubt adding some men from the “A” class, which had 23 of them, helped even the odds.

The “A’s” don't reappear in Pull lore. By 1910 the “tug,” as described in the Anchor, had assumed a more familiar form (although with some twists):

“Complete preparations had been previously made, and when the tug started no one would venture any opinion as to the outcome... When the signal was given the Freshmen gave a united pull, but their experienced opponents had established themselves so firmly that one of the knots in the rope gave way. When the rope had again been tied the tug was renewed. Neither side would yield. Each man had fortified himself to the utmost, only to find his strength equally matched. Finally, after a long and continued pull, the Freshmen through united heavings brought the Sophs foot by foot.”

The intensity of the period’s freshman-sophomore rivalry also becomes apparent in early Pull accounts. In 1916, the sophomore Class of ’19 even published a handbill warning the freshman Class of ’20 to “Take Heed” at the approach of the encounter at the Black River. In verse on the reverse it predicted:

A shot rang out, the pull was on,

It was sad as sad could be.

The SOPHOMORES happy and free.

The poetry reflected a generally good-natured hazing of freshmen, particularly by sophomores, that was common on college campuses in the United States at the time — and for many decades afterward. At Hope, the freshmen even wore green beanies, called “pots,” as a sign of their “newbie” status.

The Pull was pay-back time. A win was a chance for the frosh to show that they weren't the wet-nosed neophytes that the arrangement made them out to be.

There was also a more tangible reward.

Reported Janet Baird ’58 Weisiger, whose team won as freshmen: “What made the event so grand was that by winning the Pull, we no longer had to wear our ‘pots.’”

The sophomores in 1916, incidentally, weren’t quite the oracles they thought they were. The Pull that year ended in a draw after one hour and 45 minutes when two physicians present said that the strain was endangering the participants. As it happened, the doctors were particularly concerned about the Class of ’19, which was on lower ground and lying in wet pits.

The 1977 Pull was an extreme test of endurance. After three hours and 51 minutes, with the light failing and the health of the participants — as in 1916 — a concern, the event was called a tie. To help avoid such problems in the future, new rules were created for 1978 allowing the judges to declare a winner by measurement if neither side has claimed the rope after three hours.

The Pull has experienced a variety of changes through the years. The current method of pulling — lying along the rope for the duration — is a style of recent decades. In earlier years, the teams were prone for the beginning of the event (15 minutes) but then stood simultaneously and “pulled” upright to the end.

The 1898 Anchor reference doesn’t include a site, but the late Rev. Berend T. Vander Woude Sr. ’13 remembered a creek near Pilgrim Home Cemetery as hosting the 1909 contest and being at the Black River in 1910.

The team size has been a constant for most of the Pull’s history, but it wasn’t always so. For example, the late Dr. Gerrit John Van Zoeren ’12 recalled his sophomore team in 1909 as being “outnumbered two to one. Time less than five minutes.” The October, 1910, Anchor, even reports that “Because of the disadvantage in foot-holds and the unfavorable lay of the ground the Freshmen were permitted to have two extra men, so as to even up the pull.”

For most of the Pull’s history, men served on the rope and women acted as the “moralers,” long called “morale girls.” The term was changed earlier this decade to reflect the idea that either gender can participate either way, and Keri Law ’99 became the first woman to compete as a puller in 1995.

The win-loss record favors the sophomores and even-years. There’s a sports adage, though, to the effect that any team can beat any other on any given day, and no Pull team relies on the weight of history to assure the outcome.

Neither, though, is winning the only thing. Listen to Pull participants, and you’ll learn that the event is as much about friendship, and teamwork and pushing oneself as it is about winning or losing.

“It’s that sense of family and that sense of teamwork and also what you learn about yourself — that sense of your endurance,” said Amy Strassburger ’98 VanStee, who spent four years involved in the event. “After doing it my freshman year, I couldn't imagine coming back to Hope and not doing it again.”

In a 1988 interview for News from Hope College, coach Gary Kunzi ’89 shared a bit more on the appeal when he discussed the challenge of reaching beyond limits. “There is no way that anybody can just get on a rope and pull for three hours. I'm convinced that it’s physically impossible. The only way to do it is to go beyond what you ever think you can do.”

It’s the timelessness of those quests — to connect meaningfully with others, and to reach one’s best — that helps the Pull endure. The Pull is a new discovery, and a chance for self-discovery, for each and every person who’s a part of it.

Tradition without heart is only habit. It is a ceremony that has lost touch with its meaning.

The Pull is one tradition that remains fresh. It finds its heart each year in the dedicated individuals who commit themselves to working together to do the impossible.

Find directions and a map to the Pull site

The Keppel House, a prominent campus landmark with a storied community and campus history will soon provide a spacious new home for Hope College’s Center for Diversity and Inclusion and multicultural student organizations.