This is not a full list of upcoming philosopy courses. To see a complete list and course details, including dates, times and professors, please see the Registrar’s course schedule.

Phil 295 – studies in philosophy: Philosophy and tragic literatures
In Aristophanes' play The Frogs, the tragic poets Euripides and Aeschylus appear as characters, claiming that poetry exists for the education of mankind. Decades later, Plato's Socrates famously casts the old poets from his ideal city, explaining that their works are a danger to the city and its citizenry. Plato's student Aristotle, however, attempts to rehabilitate tragedy by explaining its psychological value. From these ancient sources, a millennia-long debate about the nature of tragedy and its place in human life has been sustained across different cultures. In this course, we shall follow the contours of this conversation by reading tragedies and theories of tragedy as they evolve from ancient Greece through renaissance Europe and into contemporary Africa and the Americas. Doing this, we shall reflect on the tragic condition of humankind and the capacity for tragic literature to help us recognize ourselves.

Phil 450 – capstone Seminar in Philosophy "problems of agency"
Consider putting on your shoes in the morning, or eating breakfast, or brushing your teeth. With each of those things, you probably felt like it was something you did. You were what we call an agent (one who acts), as distinct from a patient (one who is acted upon). Contrast this with when a doctor checks our reflexes, or when we are knocked over by a strong gust of wind: our subsequent motion is an event in our bodily history, but we are not active in it. The distinction between being an agent and being a patient is crucial to numerous philosophical questions. In this class, we will be examining several of them. What does it mean to have free action, or a free will? Why and how do we sometimes act contrary to what we think would be best? Are we morally responsible for things that are beyond our control? How can we control not only what we are going to do but who we are going to become? These are some of the topics we will cover in this class.

PHIL 450 is required for all senior philosophy majors, and recommended for senior minors and junior majors.  It is open to other students with permission of the instructor.

Hope’s philosophy department offers courses in applied ethics and philosophies of law, politics, the mind, religion and science, as well as courses in major philosophical movements (such as existentialism and postmodernism), cultures (such as those of India, Tibet, China and Japan) and time periods (such as ancient, medieval and modern). 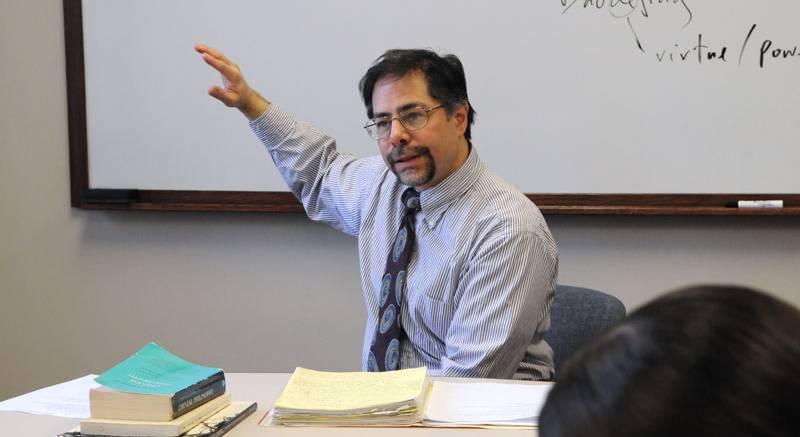 Philosophy students can take their courses in many different orders, but here are some suggestions for success:

There are no prerequisites for our courses, but it helps to take a logic class (PHIL 200 or 201) as early as possible.

Plan to take PHIL 450 (the Philosophy Capstone) in the fall of your senior year. We expect all majors to do this (and it’s definitely recommended for minors as well).

We encourage students with other majors and minors in addition to philosophy to consult with the chair or other faculty members about philosophy courses that overlap significantly with their areas of interest. For example, some philosophy courses are cross-listed with religion or political science, some are electives within other programs (such as Women’s and Gender Studies or the neuroscience minor), and some graduate programs recommend or require undergraduate courses (such as ethics courses for pre-med students).

Our Honors Program allows interested students to go beyond the standard requirements and dig deeper.