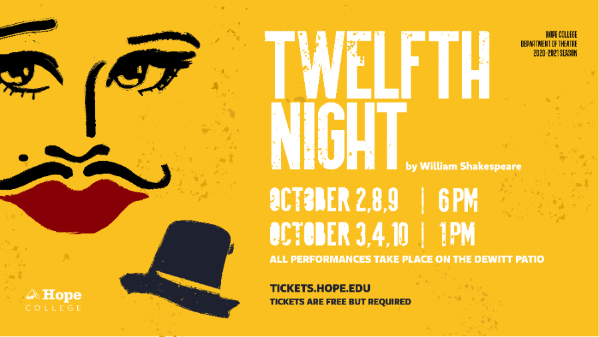 Twelfth Night is one of my favorite plays by Shakespeare. Originally slotted to be produced last April with guest director Johamy Morales and guest scenic designer Sarah Pearline, our production was moved to this fall semester, due, of course, to the Covid 19-pandemic. I took over as the performance’s director and was grateful for this opportunity to immerse myself in the wit, fun, and romantic mishaps of this great comedy.

Artistic decisions related to the precautions the pandemic has necessitated have made for an interesting and challenging rehearsal process. We have rehearsed outside during daylight hours. We have staged the play with social distance between characters. We have worn masks throughout the process and sanitized props and set dressing daily. Our “set’ is the architecture of our “home,” the DeWitt Center and its lobby patio. Lighting and sound elements have been pared down as potential weather conditions and available power sources limit our design capabilities. Our live audience is also limited -- to Hope faculty, staff, and students.

On the other hand, our two scheduled live-streams of the production (October 3 and 9) will give many more people than usual the chance to see our work. Furthermore, the “restrictions” of our outdoor performance have provided us with valuable learning moments and artistic growth.

As I like to say, theatre is a “full-contact sport.” With masks and socially-distanced staging, it has become even more evident that actors must develop expressive and versatile voices and bodies to convey the meaning of Shakespeare’s dense language and delightful characters. Our process has only confirmed how important full vocal and physical commitment and flexibility are to clear storytelling and vivid portrayals. Our “set’ has given us inspiration for stage pictures and movement. Rehearsing outdoors, with both curious and pre-occupied passers-by, has strengthened our playfulness as well as our desire to connect to and reach our audience.

Whether you are “live” with us today or attending our performance “virtually,” we thank you for coming. Like all of the arts, theatre is suffering tremendously during this pandemic as almost all performances have been shut down. We are fortunate that with the support of the college we have found a way to continue practicing and presenting the art form we love. We are so grateful to be able to share Twelfth Night with you!

Land Acknowledgement
Together we acknowledge that we gather as Hope College on the traditional land of the Peoria, Potawatomi and Odawa Peoples, past and present. We honor with gratitude the land itself and the people who have stewarded it throughout the generations. As a community, we recognize the ever-present systemic inequities that stem directly from past wrongdoings. We commit to respecting and reconciling this long history of injustice, as well as committing to be better stewards of this land that we inhabit.
Gender in Shakespeare

In Shakespeare's time, all characters were played by men. Think of any female Shakespeare character — Juliet, Hero, Helena, or Viola. These roles were all played by young boys whose voices had not dropped yet. Why were these roles not played by women? Women were not legally allowed to act in England. In the late 16th and early 17th centuries, ideas of sex and gender largely influenced how people thought about theatre. A woman's primary roles were to be a wife, mother, and homemaker. Acting was seen as the opposite of these expectations. Women were not allowed to exhibit themselves on stage, given what was seen as socially accepted behavior for their gender.

However, as Lucas Garcia says, "theatre was a unique area in which gender could be manipulated and toyed with in public, albeit by men only." Shakespeare often blurs the line between sexuality and gender in his plays, reversing gender roles and having characters cross-dress. Cross-dressing was considered a threat to gender hierarchies at the time. In A Midsummer Night's Dream, Titania is more powerful than her husband. In As You Like It, Rosalind runs away and dresses up as a boy. Viola also disguises herself as a boy in Twelfth Night.

It became legal for women to act in 1661. As views on gender and sexuality have changed, it has become common for women to play traditionally male roles. One of the most famous examples is Sarah Bernhardt's 1899 performance in the title role of Hamlet. Lisa Wolpe founded the Los Angeles Women's Shakespeare Company in 1993. Although the company has since closed, Wolpe remains the female actor who has played the most male Shakespeare roles in history. She performed her Shakespeare and the Alchemy of Gender at Hope in 2015. In Hope College's production of Twelfth Night, several male characters are being played by female actors. Watch how all of our actors explore the gender and sexualities of their characters as actors did in Shakespeare's time. 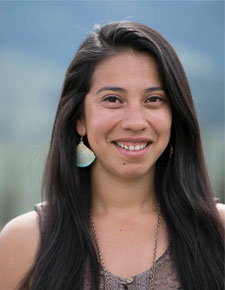 Johamy Morales was to be our guest director for the department’s production of Twelfth Night in April 2020. The Covid-19 pandemic led to the Theatre Department’s necessary cancellation of the production.

We regret not being able to bring Johamy back to campus to finish her work with us. Students, staff members, and faculty all learned a great deal from Johamy’s inspiring presence and creative approach to theatre during her short residencies with us in October 2019 and January 2020. We were so looking forward to the production of Twelfth Night she would bring to our audiences in April.

Nevertheless, we want to acknowledge Johamy’s deep contribution to this re-imagined production, now set outside on the DeWitt Center’s patio with masks, socially-distanced staging, and social-distanced audiences in the midst of the pandemic. Much has had to be changed from Johamy’s original vision of the production on the shores of Lake Michigan. However, we hope her positive spirit and delightful imagination still infuse our production – and we are grateful for her terrific cutting of the play as the basis of our final version.

Johamy is the Director of Education at the Seattle Children’s Theatre. She holds an MFA in acting from The Ohio State University, with a specialization in outreach and devising new work, and a BA in Theatre from San Diego State University. She serves as a Trustee for Theatre Communications Group (TCG) and is the former Director of Educational Programming for Creede Repertory Theatre in Colorado. She has also worked with the Comparative Arts Department at the Interlochen Center for the Arts, Arena Stage in Washington, D.C., and La Jolla Playhouse in San Diego. Most recently she was a primary dramaturg for an online production of A Kids Play about Racism, for which the Seattle Children’s Theatre, in partnership with the Bay Area Children’s Theatre and the Alliance Theatre, created an impressive “Active Audience Guide.”

The Theatre Department looks forward to inviting Johamy to return as a guest artist when circumstances and schedules allow. 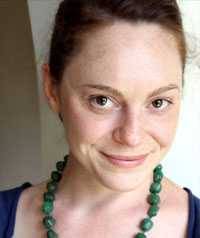 Sarah Pearline was to be our guest scenic and properties designer for this same production of Twelfth Night. And again, the Covid-19 pandemic necessitated stepping back from the design Sarah had imagined for this production. We include it here to acknowledge the creative and inviting set Sarah had envisioned. Our technical director Stephen Krebs had not finished building it when Hope College moved to online instruction in March but he and his staff of student workers were well on their way.

Sarah is a resident artist with Circus Flora of St. Louis and Purple Rose Theatre Company in Chelsea, Michigan. She has also recently worked with Titan Theatre Company in New York and the Detroit Public Theatre. Sarah holds an MFA from the Yale School of Drama and a BFA from New York University’s Tisch School of the Arts. She is the resident scenic designer and charge scenic artist for the Hope Summer Repertory Theatre.

Her 2019 designs for the company included West Side Story, The Old Man and the Old Moon, and Shakespeare in Love. Both HSRT and the Theatre Department look forward to future collaborations with Sarah.

Find out more about Hope College Theatre faculty and staff.  Don't have your ticket yet? Reserve yours to see Twelfth Night before October 10!