Streaming from the Knickerbocker Theatre 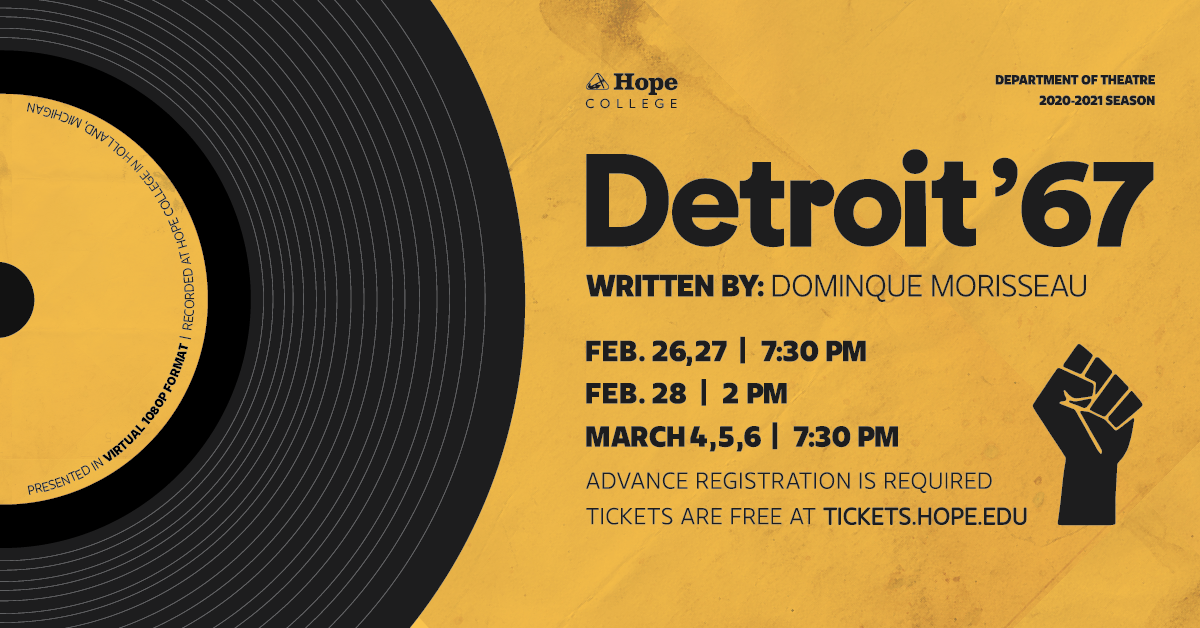 Welcome to the virtual program for Hope College Theatre's production of Detroit ’67. Please enjoy the performance!

Please note: Detroit ’67 by Dominique Morisseau is set during the actual event known as the Detroit Rebellion in 1967. The playwright has written words that while accurate for the characters in the play, can be considered offensive toward black people or police officers. Non-black people should never use these — or any — slurs toward non-white people.

On July 17, 1967 violent clashes erupted between the inhabitants of primarily African American neighborhoods in Detroit and the city’s law enforcement. The conflict would explode into five days of one of the deadliest and most destructive riots in American history. What would become known as the Detroit Rebellion resulted in the deaths of 43 citizens with countless others injured. Over 7,000 people were arrested, and more than 1,000 buildings were burned in the uprising.

There were many causes for the rebellion. It was ignited by long-standing anger about police brutality as well as a sense of hopelessness about unemployment, poverty, inferior schools, low rates of home ownership and poor social services, according to city officials and neighborhood leaders. Perhaps Langston Hughes’s question — “What happens to a dream deferred… does it explode?” — was being answered.

Whenever someone asks me why I wanted to direct Detroit ’67, I recall my visits to Detroit and how it reminds me of my childhood. Until the time I was nine years old, I grew up in a predominantly African American neighborhood in Oakland, California. Since that time, I don’t think I have ever lived anywhere I felt so comfortable and safe. We lived below my grandparents in a renovated basement apartment where I often heard the “Motown sound” drifting over from next door. Our neighbor friends, Barbara and Lisa, would practice their competitive dance routines while the “funky” sounds of James Brown would underscore their syncopated moves.

I knew their parents as hard-working and dedicated. Folks you knew always had your back and you knew you could count on them. Much like the Chelle and Lank, the sister and brother duo of our story, they were proud people who persevered in spite of the personal and societal pressures they were forced to endure throughout their lives. I believe the majority of Detroit residents are the same. We love where we come from and are often disheartened by the negative misconceptions continuously perpetuated about our communities.

Much of my theatrical career has been dedicated to giving a voice to those who do not have one. By bringing the untold stories of marginalized people to American stages, it is my dream that we can expand our empathy and respect for those often pushed to society’s margins. Last year that dream inspired me to create a staged reading series called the Many Voices Project. Its mission:

“The Many Voices Project (MVP) was inspired by a need. A need to expand the repertoire of stories told on our American stages. While Hope College’s Theatre Department has always strived to be an inclusive body, we feel the time has come to be even more intentional in our efforts to support underrepresented voices. Those voices include, but are not limited to — African American, Latinx, American Indian, persons with disabilities, women and the LGBTQ communities. If we are to become the just and equitable society that so many of us long for, then we must create space for every voice to be heard and honored.”

Because another play I was slated to direct this semester was cancelled due to COVID constraints, I suggested replacing it with the Detroit ’67, the second play read in our series. Fortunately, the theatre faculty was very open to the idea and the original cast of that reading has returned to reprise their roles in this fully staged production.

Today you are witnessing a milestone. In over 50 years of creating theatre at Hope College, our department has never produced a play by an African American playwright in its academic season. While we are not proud of this fact, we recognize that it is never too late to become instruments of change. Like the characters in Detroit ’67, we are dreamers. We long for a just and equitable world where no dream has to ever be deferred. We are committed to making that dream come true.

Thank you for joining us today.

Land Acknowledgement
Together we acknowledge that we gather as Hope College on the traditional land of the Peoria, Potawatomi, Ojibwa and Odawa Peoples, past and present. We honor with gratitude the land itself and the people who have stewarded it throughout the generations. As a community, we recognize the ever-present systemic inequities that stem directly from past wrongdoings. We commit to respecting and reconciling this long history of injustice, as well as committing to be better stewards of this land that we inhabit.
Dominique Morisseau

Dominique Morisseau was born in March 1978 and grew up in Detroit, Michigan. She attended the University of Michigan, graduating with a BFA in acting. During her sophomore year at the university, a professor told Morisseau she needed to choose between writing and theatre. Instead, she chose both and came back the next year with a play that showcased a black cast. The production proved to be a campus sensation, as it brought a new audience to the theatre with students from departments across campus attending. The production was sold out every night.

An interesting part of Morisseau's process is her consistent request for her father's input. Before sharing her plays with anyone else, she passes them onto him for feedback. In addition to Detroit ’67, Dominique Morisseau has written six other plays: Sunset Baby, Skeleton Crew, Pipeline, Paradise Blue, Blood at the Roof, and Follow Me to Nellie’s. In 2019 Morisseau, wrote the book for the Broadway musical Ain't Too Proud: The Life and Times of the Temptations. She subsequently received a Tony award for her work. However, her accomplishments do not stop at the stage. She has been a co-producer of the Showtime series “Shameless” since its third season.

Morisseau's voice as a playwright is unique and offers a new perspective on the civil unrest of 1967. As she wrote Detroit ’67, she researched the rebellion and its socio-political context. Morisseau explains her limited knowledge of the rebellion as a child:

“I don't think my parents talked to me much about this [...] I don't think it was intentional, but this was a generation that wanted to move on, like this was a stain on the past, that we were in some kind of post-racial America and wanted to get past it. It wasn't until recently that these issues came back into focus, more like exploded in our faces.” Detroit '67 is one of three Detroit-themed plays in Morisseau's The Detroit Project. The other plays included in the trilogy are Skeleton Crew and Paradise Blue.

Along with her Tony, Dominique Morisseau has received many awards such as the Spirit of Detroit Award, the Steinberg Playwright Award, the Edward M. Kennedy Prize of Drama, an Obie Award, the Ford Foundation Art of Change Fellowship, and a MacArthur Genius Grant Fellowship.

Recently, Morisseau has been named Executive Artistic Producer of the Detroit Public Theatre. The theatre has produced four of her plays in five seasons, and Morisseau has previously served as an advisor, collaborator and member of the theatre's board of directors. One of the three founding producing artistic directors of the Detroit Public Theatre is Sarah Clare (Meyer) Corporandy, a 2001 graduate of the Department of Theatre at Hope College.

The Detroit Rebellion of 1967

On a hot night in the middle of the summer of 1967, a party for two black Vietnam veterans was happening in a suburb of Detroit, Michigan. The party took place at what was known as a “blind pig” — an after-hours drinking establishment. Around 3:15 in the morning, the police showed up to conduct a raid. What followed came to be known as the Detroit Rebellion of 1967 or the 12th Street Riot. Detroit ’67 takes place before, during and after the events of “the most destructive urban riot of the 1960s.”

When the police arrived at the “blind pig” in the early morning of July 23, 1967, they expected only to find a few people at the establishment. Instead, they ended up arresting all 82 black people attending the party. Because of the heat, many others were out in the street, and the large number of arrests happening garnered their attention. In response to “unnecessary and overbearing force,” the crowd began to protest. The rebellion began when a brick was thrown into the rear window of a police car. Soon more violence, burglaries and fires spread across the city.

The entire uprising took place over five days as clashes between rebels and police continued. The mayor of Detroit, Jerome Cavanagh, “ordered that looters not be shot; as the word of his order spread, so did looting.” Between police and rebels, access to weapons and firearms turned Detroit into, as some would call it, an “urban warzone.” It went so far as to involve state police, the National Guard and U.S. Army troops at the order of President Lyndon Johnson. It was only then that the rebellion calmed down. In total, 43 people died during this rebellion, mostly African Americans. There were an additional 1,700 injuries and almost 7,000 arrests. The consequences of this event were no small thing — watch as the Detroit Rebellion of 1967 impacts the characters in Detroit ’67.

Find out more about Hope College Theatre faculty and staff.  Don't have your ticket yet? Reserve yours to see Detroit '67 before March 6!

The Department of Theatre at Hope College will present playwright Lauren Gunderson’s “The Revolutionists” on Friday-Sunday, Feb. 17-19 and Thursday-Sunday, Feb. 23-26, in the DeWitt Center studio theatre.