Streaming from the DeWitt Main Theatre 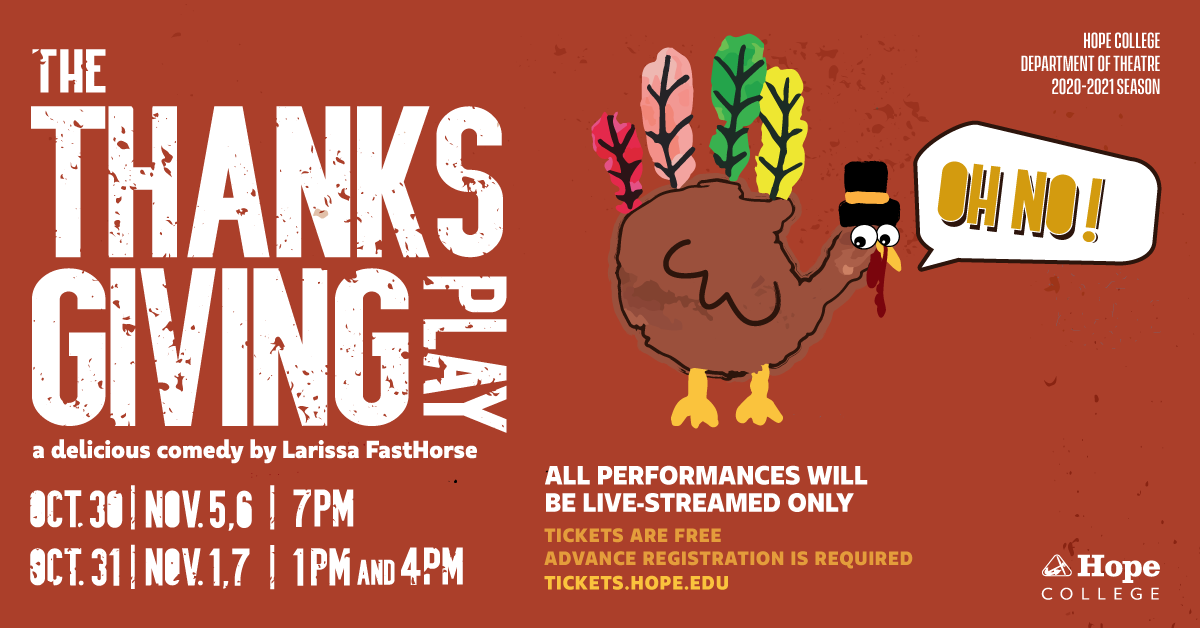 Welcome to the virtual program for Hope College Theatre's production of The Thanksgiving Play. Please enjoy the performance!

If you are like me, you may associate Thanksgiving with family gratefully gathered to enjoy a delicious meal of tender turkey, savory stuffing and other “traditional” treats. Perhaps the day starts with the little ones watching the Macy’s parade on television, followed by the big game later in the day, all culminating with delectable desserts and fond farewells at the end of the evening.

And if you’re also like me, other than gratitude for the opportunity to share a mouthwatering meal and enjoy a bit of family time, the meaning of the day has been long forgotten. Or perhaps, you never really learned what the day signifies or, more problematic, the many misconceptions associated with the holiday.

Some of us grew up learning about the “first” Thanksgiving in 1621, celebrated by a group of Indigenous Peoples and the Pilgrims after their first harvest in the New World. With The Thanksgiving Play, playwright Larrissa FastHorse has worked hard to dispel the problematic mythology around this beloved celebration. She states, “My hope is that you will benefit from my months of research about this day you think you know and leave the theater asking your own questions, and then question everything you’ve been told.” (FastHorse)

While the characters in this play are well-meaning “progressives,” we soon learn that they, like many of us, are also deeply flawed. In their heroic efforts to right the wrongs of the past, they continue to make the same mistakes so many have made previously. While The Thanksgiving Play is a comedy, at its heart it asks us to question our long-held beliefs and why we continue to hold on to them, even when they no longer serve us or the greater good.

Land Acknowledgement
Together we acknowledge that we gather as Hope College on the traditional land of the Peoria, Potawatomi, Ojibwa, and Odawa Peoples, past and present. We honor with gratitude the land itself and the people who have stewarded it throughout the generations. As a community, we recognize the ever-present systemic inequities that stem directly from past wrongdoings. We commit to respecting and reconciling this long history of injustice, as well as committing to be better stewards of this land that we inhabit.
Larissa FastHorse

Larissa FastHorse, the playwright of The Thanksgiving Play, is of the Sicangu Lakota Nation. She currently lives in Santa Monica, California. FastHorse is an accomplished and widely recognized playwright, choreographer, and director. She began her career as a ballet dancer and has worked in the television and film industry. Later she became an independent playwright and choreographer, with her first play, Teaching Disco Squaredancing to Our Elders: A Class Presentation, published in 2008. Her other plays include Native Nation (2019), Cow Pie Bingo (2018), Urban Rez (2016), Landless (2015), and Cherokee Family Reunion (2012).

FastHorse is the co-founder of the company Indigenous Direction. As a company, Indigenous Direction works to advise both theaters and film projects on how to address Native issues and representation. FastHorse also uses her background and influence to speak to wide audiences. She discusses how to make sustainable and reciprocal relationships with Native American communities. As a result of both this work and her work as a playwright, choreographer and director, FastHorse has received many awards.

Some of these include the UCLA Native American Program Woman of the Year, NEA Distinguished New Play Development Grant, and AATE Distinguished Play Award. This year, Larissa FastHorse received the MacArthur Fellowship (commonly known as the 'genius grant'). These awards are given to individuals that are “extraordinarily talented and creative.” In order to receive this award, an individual must have “exceptional creativity,” “promise for important future advances based on a track record of significant accomplishments,” and “potential for the Fellowship to facilitate subsequent creative work.” Receiving this award is a huge honor and Larissa FastHorse is well-deserving of it.

Thanksgiving is a holiday widely celebrated across the United States. Those familiar with this tradition probably remember hearing stories of the “first Thanksgiving.” As the story goes, this famous meal was shared between a community of settlers and indigenous Americans. While this tale may have some semblance of truth, it is important to understand the misconceptions and misrepresentations present within this “American tradition.” The history lessons many of us have been taught are incomplete, and many times mention very little of the negative impact settlers had on the indigenous people of the Americas.

According to a recent study published by the Reclaiming Native Truth Project, a major part of the United States population is oblivious to the misconceptions presented by our taught history, causing them to “rely on stereotypes of Native Americans as noble or savage warriors or more cartoonish representations of Native Americans as mascots.” This problematic thinking can lead to a narrative that “dehumanizes Native peoples and erodes support of Native issues.”

The misconceptions surrounding the interactions between indigenous cultures and settlers are deeply harmful to Native narratives. The story of the first Thanksgiving specifically impacts the people of the Wampanoag Tribe. History surrounding Thanksgiving implies that the Wampanoags’ first interaction with Europeans was when the Pilgrims settled in Plymouth around 1620. This is largely false, as the natives had already had at least a century of contact with Europeans due to early slave raids.

Furthermore, while commonly taught history paints the early interactions between the Wampanoag Tribe and the Pilgrims as positive, this is not entirely the case. It is true that Chief Massassoit, commonly referred to by modern historians as Ousamequin, made contact with the Pilgrims, quickly forming an alliance. Yet, this treaty had more to do with defense against other tribes than kindness, as disease had already weakened the Wampanoags. Also, as stated by David Silverman in an interview with the Smithsonian’s Claire Bugos, “the Thanksgiving myth doesn’t address the deterioration of this relationship culminating in one of the most horrific colonial Indian wars on record, King Philip’s War, and also doesn’t address Wampanoag survival and adaptation over the centuries, which is why they’re still here, despite the odds” (Bugos). It is also true that Chief Massassoit and many of his warriors shared a feast at some point as well. However, they were not originally invited, only showing up because they heard gunshots and were looking to offer aid in order to honor the treaty.

The fallacies present among the story of the first Thanksgiving, as well as much of what is taught about indigenous Americans in schools across the United States, go much deeper than what is discussed on this board. David Silverman sums this up well with one of his interview answers, saying:

"It does damage to how our native countrymen and women feel as part of this country, it makes white Americans a lot less reflective about where their privilege comes from, and it makes us a lot less critical as a country when it comes to interrogating the rationales that leaders will marshal to act aggressively against foreign others."

It is imperative that the American people be aware of the discrepancies that exist within our history. Recognizing and listening to the voices of Native people across the board is the first of many steps it will take to begin this process.

Find out more about Hope College Theatre faculty and staff.  Don't have your ticket yet? Reserve yours to see The Thanksgiving Play before November 7!